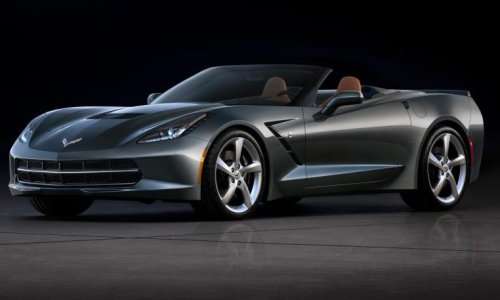 The 2014 Chevrolet Corvette Stingray Convertible will debut this coming week at the 2013 Geneva Motor Show but thanks to the never ending wonders of the internet – we have shots of the new drop top C7 Vette with the folding hard top both up and down.
Advertisement

As you can probably imagine, there is really no information to accompany these leaked images of the 2014 Chevrolet Corvette Stingray Convertible but there are a few interesting tidbits of information to be gathered from these two shots. After all, a picture is worth a thousand words. In my opinion, these two pictures are worth about 766 words but this will likely quench the thirst of Corvette lovers until the new C7 Stingray convertible makes it big debut next week in Geneva.

In late January, a pair of similar images of the 2014 Chevrolet Corvette Stingray Convertible in deep metallic red surfaced on the internet, showing us the front and back of the new drop top and while that car did not wear the rear spoiler or the rear quarter panel vents of the Z51 package, it did have the Z51 wheels from the Detroit C7 debut. On the other hand, the newest leaked images of the Stingray Convertible show a car that is wearing the rear spoiler and what appears to be the Z51 brake setup but it sports different wheels and still does not have the rear quarter panel vents. This leaves many wondering what exactly we were looking at in those shots of the red car and what we are looking at with these new shots of the C7 Convertible with the top both up and down.

Word around the internet suggests that the wheels shown on the new leaked 2014 Chevrolet Corvette Stingray Convertible images will be optional wheels for the Z51 in both drop top and coupe form but when it comes to showing off the big, impressive braking setup of the Z51 package – these curvy 5 spoke wheels offer much more access to onlookers than the split spoke wheels that we got to see in Detroit. As for the rear quarter panels vents, the mechanical works that allow the Stingray’s folding hard top to tuck away neatly into the trunk took up too much space inside of the quarter panels so the convertible version of the Stingray with the Z51 package will have its transmission and rear differential cooling vent located under the car.

Discussions around the web indicate that the C7 Stingray Convertible will call upon a folding hard top rather than a more conventional soft top but in the new picture showing the Stingray with the top in the upright position, it almost looks like the top has been covered in cloth as there don’t appear to be any seams where the top would fold up. This leads me to believe that the joints where the hard top will fold are covered with cloth to provide a cleaner look when the top is up. The operation of the top and close up shots of just how the drop top feature works will be one of the most interesting aspects of the new Stingray Convertible with it debuts next week.

Other than the fact that the roof has been removed and the addition of these new wheels, there seems to be very few differences between the hard top and convertible versions of the 2014 Chevrolet Corvette Stingray and – not surprisingly – the new form of the C7 Corvette looks every bit as sexy on the convertible as it does on the coupe. The biggest piece of news surrounding the new C7 convertible is just how much difference in weight the removal of the top and the addition of the folding hard top makes compared to the coupe. In many cases, taking a coupe and turning it into a convertible will add a fair amount of weight as the mechanics for the folding top, along with additional chassis reinforcements add weight through items that are not present in the coupe. However, you would think that the company would take as many steps as possible to keep the curb weight of the Stingray Convertible as close as possible to the figures of the gorgeous coupe that debuted at the 2013 Detroit Auto Show.

The gallery on the right (click any thumbnail for the full gallery) shows both the red “mystery” Corvette Convertible that appeared online in January as well as the new grey Stingray Convertible that is believed to be an official (yet undesired) leak of the actual car that will debut next week in Geneva.