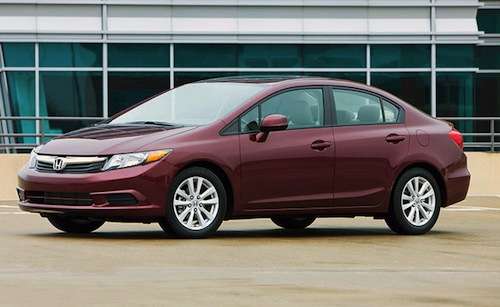 What other new cars should you think twice about purchasing? Keep reading to find out.
Advertisement

Popularity does not always equal quality when it comes to cars. With this sentiment in mind, Consumer Reports has compiled a list of the top five trendy models that car buyers should avoid. Although these five vehicles are perennial favorites amongst shoppers, Consumer Reports indicates that each performed poorly in their testing and possess below average reliability. Additionally, the popular publication contends that there are much better alternatives available to prospective buyers.

Jeep Liberty
Next up is a vehicle that earned the dubious honor of receiving one of Consumer Reports lowest road-test scores in recent memory: the Jeep Liberty. Although the 2012 Liberty is capable of adequate off-roading, it cannot handle pavement. Consumer Reports contends that the Liberty’s driving experience is uncomfortable and clumsy. Not to mention, engine noise is high and fuel efficiency is extremely low (16 mpg overall). Consumers in need of an SUV with better gas mileage and ride quality should consider the Toyota RAV4 and the Subaru Forester.

Toyota Prius C
Anyone who read Consumer Reports’ review of the all-new Toyota Prius C should not be surprised that it made this particular list. The site’s reviewer infamously called the Prius C “lackluster” and “cheap,” which prompted Cars.com to come out and defend the vehicle. Despite Cars.com’s defense, Consumer Reports stood their ground claiming the Prius C simply “isn’t a good car.” Although it gets less mpg, consider the Honda Fit, which scored higher in road-tests and costs much less.

Ford Edge (V6)
Rounding out Consumer Reports’ list is the 2012 Ford Edge. Although it may have a stylish appearance, the Ford Edge (V6) offers a bumpy ride and prominent road noise. The Edge also suffers in terms of its complicated controls, including the MyFord Touch infotainment system. The site’s annual survey also revealed that the Edge’s reliability was “much-worse-than average.” That said, the four-cylinder model does get better fuel economy, but is not available in all-wheel drive. Better alternatives include the Toyota Highlander, Mazda CX-9, and Nissan Murano.