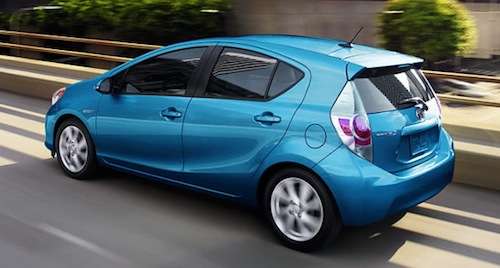 The Toyota Prius C has been denied the recommendation of Consumer Reports.
Advertisement

Generally speaking, if a review contains the phrase “That’s where the good news ends,” it does not bode well for the product being critiqued. That is essentially what has just happened to the all-new Toyota Prius C in a review by Consumer Reports. The website has torn apart the new full-hybrid vehicle calling it “lackluster” and “cheap.”

So was there anything that Consumer Reports liked about the Prius C? Well, it couldn’t all be bad, because the agency did give the vehicle credit for its solid gas mileage. Unfortunately for Toyota that is where the praise ended and the onslaught began. According to Consumer Reports, the Prius C is built on a “lackluster” platform, modeled after the Toyota Yaris. Aside from a less than stellar platform, Consumer Reports contends that the vehicle’s steering feedback is “dead” and the ride feels “busy and choppy.” The Prius C’s ride quality especially suffers during highway driving where acceleration is slow and road noise is abundant. Not to mention, it is a struggle to maintain highway speeds above 40 miles per hour traveling uphill.

Although the Toyota Prius C starts at $18,995, Consumer Reports does not feel the price makes up for its shortcomings. The consumer website also stated that as the price climbs, the value of the Prius C does not. In the end, Consumer Reports could simply not justify paying $20,000 for a vehicle of this caliber. They even went as far as advising consumers to buy a used regular Prius rather than a brand new Prius C.

Further backing up Consumer Reports’ claims is an analysis by U.S. News and Rankings. The website, which analyzed 26 published reviews for Prius C ranked it 25th out of 41 Small Cars. Like Consumer reports, U.S. News indicates that the biggest complaint reviews had with the vehicle was its “underpowered engine” and “cheap interior materials.” That said, the majority of reviews did praise the Prius C for its high fuel economy ratings.

Despite the scathing Consumer Reports review, Prius C sales have been solid for Toyota. In its first month, the hybrid sold 4,782 units, outselling both the Prius V and subcompact Yaris.

LG's New EV Battery Plant Is a Welcome News for Tesla
Tesla Giga Berlin's New Hurdle: It's Not Only the Gov't, but Now Tesla Itself
END_OF_DOCUMENT_TOKEN_TO_BE_REPLACED