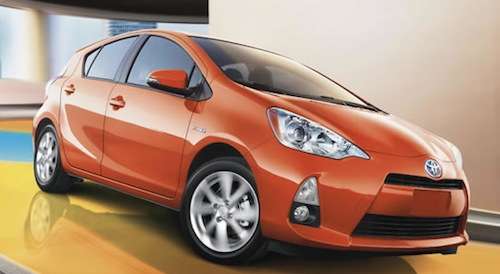 Despite a scathing review from Consumer Reports, Cars.com remains totally behind the Toyota Prius C.
Advertisement

Consumer Reports sparked some controversy earlier this week with their less than complimentary video review of the all-new Toyota Prius C. The review, which included words like “cheap” and “lackluster,” went as far as advising consumers to purchase a used regular Prius over a new Prius C. Consumer Reports gave the Prius C a less-than-stellar overall rating of 53, setting it near the bottom of its class.

It was this negative review that prompted the people over at Cars.com to intervene. Although Cars.com recognizes that everyone is entitled to their own opinion, the automotive review site wrote, “We have to step in and let car shoppers know we have a different point of view that could impact the car they decide to buy.”

Despite Consumer Reports’ disappointing test scores, Cars.com had an entirely different impression of the compact full-hybrid vehicle. According to Cars.com, "If value proposition were the 2012 Toyota Prius C's only feat, it would likely still be a sales success, but the mini-Prius is also surprisingly roomy — and has a comfortable ride and an impressive array of standard features."

Cars.com also contends that the vehicle’s price is reasonable, in spite of Consumer Report’s contention that it is too expensive. Cars.com argues that the Prius C base model, which is $19,710, is very well equipped and is competitively priced versus other subcompacts. In fact, the Prius C bested every vehicle in its class except the Nissan Versa when taking the cost of fuel into account. The Prius C also surpasses the Chevy Sonic and Honda Insight in affordability, even after adding an extra $950 for the Two trim level.

As for Consumer Report’s assertion that consumers should opt for a used Prius liftback instead of a new Prius C, Cars.com couldn’t disagree more. “While we might pick the Prius C over even a new Prius, used prices for the liftback are higher today than at any time in the past six months, according to Cars.com's inventory. This makes it a bad time to buy one on the used market.”

In order to avoid favoritism claims, Cars.com indicated that it is not in the bag for Toyota. Cars.com did not choose the Corolla as a Best Bet due to its poor driving experience. The site also gave poor reviews to the Toyota Highlander and Toyota Sienna. Cars.com has yet to bestow its Best Bet title upon the Prius C, because there is no reliability data currently available for the vehicle.