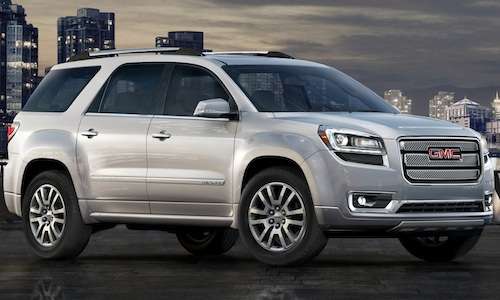 With its "Professional-Grade Engineering" motto in mind, GMC has just unveiled its redesigned 2013 Acadia at the 2012 Chicago Auto Show
Advertisement

GMC unveiled its all-new 2013 Acadia crossover SUV on Wednesday at the 2012 Chicago Auto Show. GMC hopes that this redesigned full-size SUV will capitalize on their role as GM’s second ranked volume brand.

Introduced in 2006, the Acadia shares the same platform as the Chevrolet Traverse and Buick Enclave. The Acadia is both GMC’s first front-wheel drive passenger vehicle and the company’s first crossover SUV.

So what’s new for 2013? GMC has equipped the 2013 Acadia with a series of styling, technological, performance and safety advancements. Style wise, the all-new Acadia features a redesigned exterior with a more macho facade compared to past years. The 2013 model features a three-bar grille and a new chiseled look. The vehicle’s exterior also contains a new spoiler and wraparound rear glass. The 2013 edition also adds high-intensity discharge headlamps and LED running lamps.

In addition to the Acadia’s exterior, its interior experienced a noticeable upgrade as well. Some nice touches include new stitching and aluminum trim on select models. Aesthetics aside, the Acadia interior has also undergone a major technological overhaul. New gadgets include GMC’s Color Touch Radio, which lets drivers use Bluetooth connectivity for hands-free calling and connecting various devices. Other nifty features are a photo viewer and a back-up camera. As was true with previous Acadia models, the 2013 edition still includes rear-seat entertainment and a Dual SkyScape sunroof.

The Acadia also boasts some improvements under the hood, including an upgraded six-speed automatic transmission. The 2013 model is powered by a 3.6-liter V-6 engine, which produces a maximum of 288-hp. This updated horsepower allows users to tow up to 5000 lbs. As for fuel economy, The Acadia gets EPA-estimated 17/24 mpg in front-wheel drive and 16/23 mpg with all-wheel drive.

Aside from the aforementioned updates, the Acadia’s new safety features may be the most significant. The upcoming Acadia features a front center air bag, which when deployed, blows up between front seat occupants. The new Acadia will also include blind-spot detection and rear cross traffic alert, which helps drivers avoid those pesky blind spots.

"While no restraint technology can address all body regions or all potential injuries, the front center air bag is designed to work with the vehicle's other air bags and safety belts to collectively deliver an even more comprehensive occupant restraint system," Gay Kent, GM executive director of vehicle safety and crashworthiness, said in a statement.

Although the Acadia sold 79,000 vehicles last year, which is a high for the model, it still trailed sibling brands, the Buick Enclave and Chevrolet Traverse. Whether the Acadia’s new enhancement will help it overtake its rivals remains to be seen.