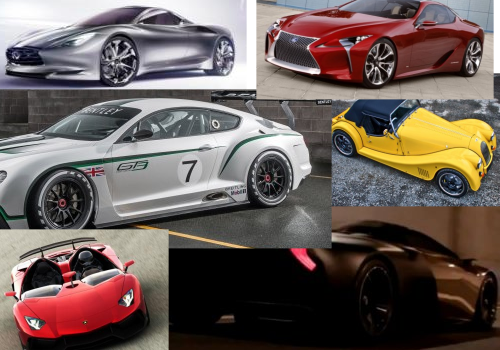 The year 2012 is almost over and we've weathered a European economic crisis, natural disasters, predictions of the world ending, and more. During that, automakers managed to put out some pretty great concept vehicles. Here are some of the best car concepts from 1012.
Advertisement

Despite all of the negatives happening this year, automotive designers and manufacturers managed to come up with some pretty great concept vehicles in 2012. Several supercars, some concept-to-production offerings, and a few outlandish "never gonna happen, but we can dream" conceptuals were given. Not surprisingly, most have a green twist.

The Peugeot Onyx supercar
While many "supercar concepts" tend to be rehashes of old nameplates, the Onyx was a truly breathtaking new concept that hit the Paris Motor Show with a drum roll and deep gasp from a stunned audience. Peugeot's use of black and copper, powerful shaping that reminds us of some of the best road racers of late, and the peering, cat-like headlamps made us fall in love with this concept immediately. Add in the 600 horsepower V8 hybrid powertrain and Pavlov will have his way.

Even a matching three-wheeled scooter and bicycle couldn't ruin the awesomeness of this concept car.

The Lexus LF-LC hybrid
While the Onyx was probably the most powerful design concept in supercars, the Lexus LF-LC smashed into stardom at the Detroit Auto Show as a made-for-production concept that successfully convinced many that Toyota may finally be taking the Lexus nameplate into a more stylish future. Many in the industry believe that the LF-LC could become the replacement flagship for the LFA that completed its production this year.

With its 500 horsepower Advanced Hybrid Drive System, this car would be more than just a flashy good looker.. it'd be a powerful fuel sipper to boot.

McLaren P1 concept-to-production
Speaking of supercars, one of the hottest makes in top-end sports cars, McLaren, announced this year that the concept P1 that rumbled into the Paris Motor Show will be a 2013 production car. With design cues coming directly from the 12C, the P1 took the look to a new level with radical track-ready shaping and promises of being one of the most powerful street-legal vehicles on the planet.

Infiniti Emerg-E
When Infiniti and Lotus team up on something, you'd best pay attention. The Emerg-E rolled into the Geneva Motor Show with a decidedly green splash. The range-extended hybrid sport coupe is a beautiful mashup of modern Lotus and Infiniti design cues, taking the Evora 414E concept a step further. Of course, it's hard to argue with the beauty of a mid-engine plug-in hybrid sporting 402 horsepower that's all electric. When the car appeared in physical form later in the year, it continued it's impressive splash.

Jeep Mighty FC offroader
When Americans think "off road," they usually think Jeep. So it was fitting that the company chose to revitalize their legendary Forward Control as a pickup truck concept in the Mighty FC. Combining a Wrangler Rubicon cab with a full-sized cargo box, the truck rolled into the heart of Jeep territory, Moab, Utah, and showed it could keep pace with its SUV brethren.

Mercedes-Benz Ener-G-Force
After Jeep's introduction of the FC, Mercedes stepped up the game by introducing the clunkily-named Ener-G-Force, which dropped on the LA Auto Show like a ton of H2 bricks. Perhaps due to its Disney-sounding name, the Ener-G-Force is a pure concept made real, as of Pixar had drawn something for a cartoon and then 3-D printed it into reality. With futuristic (and non-existent) technology like "hydro-tech converters", the concept SUV from Mercedes was nonetheless a definite hit at the LA show. Likely because, unlike most sport utilities today, it's a real off-roader rather than a glorified minivan.

Morgan Plus E style
Most electric vehicle concepts are either ugly or ultra-futuristic. Automakers seem unable to grasp the idea that the ones we remember most are those that are neither of those things. Morgan, being one of the most classic of automakers today, knows better. Enter the Plus E concept, an electric saloon anyone would be happy to own. With styling cued from the most classic of 1940s sloops, the Morgan Plus E includes a 5-speed manual transmission to keep the retro feel flowing into the cockpit of this 2-seater. When it silently glided into the Geneva Motor Show like a ghost from a Dick Tracy comic, heads turned and cameras snapped. Proving that while Americans might have Justin Morgan on a horse, the Brits have Morgan in a futuristic retro car.

Mercedes-Benz SLS AMG E-Cell electric drive
Going back to Germany, this time for a concept-to-production car, we once again see Merc building a futuristic car, but this time they're doing it for today. The SLS AMG E-Cell is an electric car that can do 0-62 mph in just 3.9 seconds with a motor for each wheel outputting a total of 740 horses. When it goes to production in 2013, the electric Mercedes-Benz SLS AMG will have a price tag of a mere half million dollars or so ($550,000 USD).

Bentley Continental GT3 takes back the track
When legendary carmaker Bentley left the racing circuit in 2003, most believed it was the end of an era. It turns out, they were just gearing up to stomp some class back into the Tourismo with the introduction of a new Continental-based GT, the Continental GT3, whose concept debuted this year. Hitting the LA Auto Show with Bentley's trademark staid and dignified manner, the GT3 will peel into the racing circuit next year to show the others how to lay rubber with class.

So there you have it. Ten of the most eye-popping concepts to come out in 2012. What's your favorite?