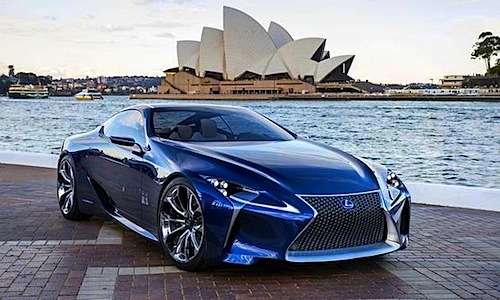 Where Is Lexus Going With Its LF-LC

Some cars are obvious and you know where they stand, who will buy them; others, like the Lexus LF-LC, live you with more questions than answers.
Advertisement

If there is a luxury/performance hybrid that is intriguing, the Lexus LF-LC certainly fits the bill. What is it? Who is it for? What does it do, are some of the questions you must ask yourself seeing it for the first time. At first glance, it looks like an exercise in style and technology. The lines are majestic, beautiful and what lies beneath sounds as impressive. But one question remains, who is it for and is Lexus serious about it or just gauging interest?

Lexus L Series, Who Are You? It’s might be best to start from the start and see how the outrageous LF-LC came to life. About a decade ago, Lexus stunned us with a performance car that sent a clear warning to high-end exotic carmakers. The message was clear; ‘We can do it also”. Do you ever get the feeling you wonder what a carmaker is doing when they present such a piece of technology that doesn’t neatly fit in any of the categories you would expect it to? That’s what I feel with the Lexus LF-LC. What exactly is Lexus doing with it? Is it a flagship, a way to say we can do that kind of stuff too or are they just gauging public interest?

Lexus F Line. Let’s start from the beginning with the F line where Lexus was allowed to flex its muscles and displayed its prowess. Starting with the IS F, the LFA is the fruit of the results form over a decade of preparation and working on the P280 project. The LF-LC is the hybrid high-performance version of it. I guess we could compare it to Audi’s e-tron, starting with the R8, all the way to its full-electric and hybrid concepts. However, the LF-LC introduces the company’s cherished spindle-shaped grille and build on its trademark. Like it or not, you’ll look at it twice, if not more.

Technically Speaking. The LF-LC is built around a front-engine, rear-wheel drive drivetrain layout, similar to the LFA but using a next-generation Advanced Lexus Hybrid Drive system. Although we know very little of it, the only thing Lexus seems to want to say is that the LF-LC boasts 500 hp.

Interior of Lexus LF-LC. The interior features a remote touchscreen control system linked to two 12.3-inch LCDs showing important information such as navigation and climate control. The force-feedback touch screen in the center console provides camera views so that the driver doesn’t take their eyes off the road. Another neat feature are smartphone-size touch screens placed on the door armrests for additional controls. You get it, this is not your McLaren F1 car, this is the space age.

Design & Styling. Lexus LF-LC was produced as a design study with the intent to produce a driver vehicle at the direction of the Lexus Center in Japan. The work began back in May 2010. Specifically, the exterior and interior was created by the Calty Design Research center in Newport Beach, California, the same people behind the exterior styling of the first generation Lexus SC coupe and the 4th generation Lexus GS. The LF-LC takes many of the eye-catching stylistic cues of the LFA and in essence is a hybrid version of it.

The Competition. Who is Lexus competing with here? Certainly its other high-end luxury coupe rivals, the BMW 6-Series and Mercedes-Benz SL Class. Audi could also be a competitor but so far the company is keeping its e-tron concepts and skunkwork development under the radar. If Lexus feels comfortable pricing its gasoline version LFA at around $375,000, we can only imagine where they are going with this hybrid. But the real question is, are there buyers out there for this?

Maybe Lexus is differentiating its high-end hybrid coupe with exactly that, a hybrid platform and Toyota’s hard earned technology. Seeing it live at the LA Auto Show, it leaves no doubt the Lexus LF-LC is striking, has a lot of jaw-dropping cues in its styling and ample horsepower to tackle the big boys but it still remains to be seen who its buyers will be.

John Goreham wrote on December 4, 2012 - 5:51pm Permalink
I've often wondered if big car companies do these strictly for branding and to keep their most talented engineers and designers from getting bored and looking around at the competition. If Lexus called this a Supra and made the price point similar to the Nissan Skyline (I mean GTR or whatever the heck they badged it) it would sell more and be more memorable.
Nicolas Zart wrote on December 5, 2012 - 2:22pm Permalink
I think Lexus made and to some extent is still making the same mistake Toyota did, play catchup to the bigger guys. Sure the quality is there, sure you can make nice cars but do we need yet another Mercedes competitor? Fortunately we are seeing more and more carmakers going back to their roots and doing what they do best, Frod's choice of cars, Honda's engineering, etc but for Lexus, it's a bit of dilemma since it was created out of thin air. Most of these companies like it and Toyota never ask themselves, what happens after I meet and surpass my goal? What motivation do I have? And so you're left with a stunning LF-LC/LFA model that is incredible but that a Lexus badge and has no definable market segment. Maybe it is a: "I can do it too" car, maybe just a showcase, maybe a way to give engineers an outlet but on the market side, it sends odd and conflicting messages. But between you and I, if they gave me one, I would take it :)

Tesla Contemplates A New Strategy for China Retail even As Sales Boom
Jay Leno on Elon Musk & EVs: “I Think He Should Get ... Credit"
END_OF_DOCUMENT_TOKEN_TO_BE_REPLACED