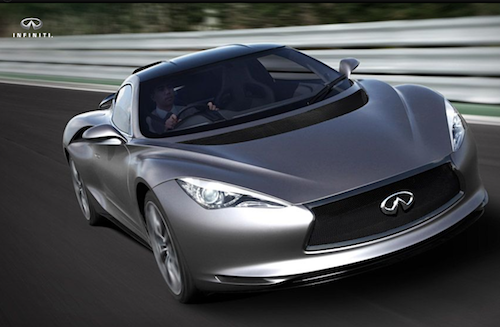 Infiniti is beating the iron while red hot with the introduction of the LE Concept at the Paris Auto Show. The Emerg-E will be showcased right next to it.
Advertisement

The Paris Motor Show held this September 27 in Hall 1 promises to be chock full of surprises, amongst which at stand 224, Infiniti will unveil its LE Concept. What you will see next to it is the award-winning Emerg-e sports car concept, as well as the M35h production hybrid under a banner promising “no compromise” performance in motoring.

More Than A Concept. But the LE is more than a concept. Infiniti promises it is production destined. In fact, according to Bernard Loire, Vice President of Infiniti Europe, Middle East, India and Africa: “The Infiniti LE Concept is a ‘production intent’ concept and most of what you see will become a reality. It is too early to confirm exactly when and where it will go on sale, but we are heartened by recent moves to encourage electric cars, such as France raising the purchase incentive from €5000 to €7000 per car. It is fitting that the LE Concept should make its European debut in Paris. Infiniti believes the future of luxury lies in sustainable luxury and we intend to continue taking a leadership role to achieve it”

All Electric Production. Taking a cue from the early success of the Nissan Leaf, the LE is Infiniti’s first take on an all-electric vehicle. The LE Concept is sort of the promise that a production version will see the light of day and be on sale in selected markets in about two years. The showroom model will display the LE Concept’s advanced powertrain and much of its design character that makes Infiniti what it is: “dynamic luxury” rather than “electric vehicle”. Think here Lexus Prius... erh, I mean CT200h. What Infiniti is hinting at production is another goody in the shape and form of its exquisite cabin and user-friendly technology. The rumors are now that there is a possibility of a wireless recharging system.

With an impressive drag coefficient Cd of 0.25, the LE Concept should please more than a few. While it is similar in size to the Infiniti G line, the LE Concept will be resolutely bigger than a Nissan Leaf. So what can we expect from the LE Concept? Most of what we’ve come to see on Infiniti cars, great lighting, comfort and that so-called luxury, great visibility. Cargo space promises to be unhindered with the lithium battery pack neatly tucked under the floor.

It’s pretty exciting to see what Infiniti will do with a pure all-electric car. In this case, the company went much further than take one of Nissan’ Leaf and re-badge as an Infiniti, as most other carmaker would do. It envisaged what a luxury electric car should look like. We look forward to test-driving Infiniti’s all-electric LE Concept, hopefully in less than two years.