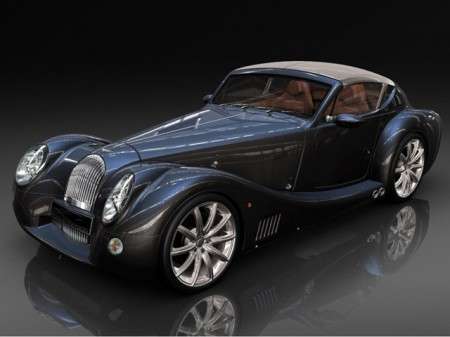 When gas prices start to rise again and you want to stir a little controversy as Britain's oldest classic auto builder, what do you do? You go electric.
Advertisement

About a hundred years ago, a man named Morgan started a car company and his family has been running it, through successive generations, since. With a reputation as the oldest classic automaker of premier, hand-made vehicles in the United Kingdom, the British company has never found it difficult to keep themselves quietly at the forefront with automotive fans.

But with gas prices going higher and a need to shake things up once in a while, Morgan has stepped out with something exciting: a new take on their classic Roadster saloon. It's going electric.

Set to debut at the Geneva Auto Show next month, the long-bodied coupe will be powered not by a signature Morgan huge displacement engine, but by batteries and an electric motor. Morgan is calling the car the Plus E concept. Gone will be the 4.8-liter BMW V8 and in will be a 70kW motor and batteries, thanks to Morgan's friends at Zytek.

Full specifications haven't been released yet, but one tidbit of interesting information has been given: the rear-wheel-driven Roadster will remain so and will thus retain its manual gearbox. That means the Plus E will be one of the first electric vehicles made by an automaker that includes a manual transmission - likely the only one.

The rest of the car will be all Roadster saloon with the new Aero SuperSports aluminum chassis (rather than the company's famous wood), helping to lighten its weight - the Aero Coupe weighs only 1,175kg. Morgan is expecting the Plus E to give "near supercar performance." With enough interest in the electric, the company will produce them for sale. Given their annual production rarely exceeds 1,000 units (in total, of all models), it probably will not require too many buyers to get the Plus E on the line.

“This is an exciting investigation into the potential for a zero-emissions Morgan with near supercar performance," says Steve Morris, Operations Director at Morgan.