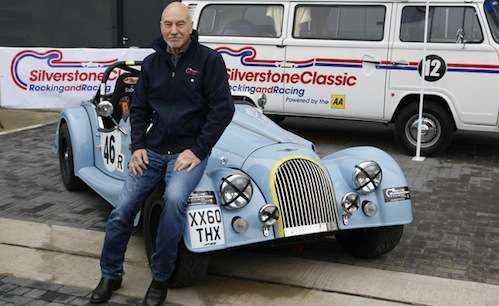 The actor Sir Patrick Stewart who played in the sci-fi series Star Trek, will be racing in this summers Siverstone Classic.
Advertisement

Sir Patrick Stewart who played Captain Jean-Luc Picard, the Starship Enterprise commander in the iconic sci-fi series Star Trek, has passed his official ARDS racing driver test and is ready to compete in a special Celebrity Challenge race at this summer’s Silverstone Classic in Northamptonshire. The circuit is located 80 miles from London.

Auto racing isn’t completely new to Stewart, he has a few competitive hours under his belt. “The only time that I’ve raced was on the Long Beach Grand Prix course in California which was in a Pro-Celebrity Toyota race and I really, really enjoyed it. But I’ve been in retirement for the last 10 years.” But the former Star Fleet Captain is making a comeback. “It was too irresistible, the chance to drive a great British sports car at Silverstone, what could be better?”

Getting certified to drive in the Celebrity Challenge wasn’t easy for the 71-year-old movie legend. For someone used to traveling around the universe at warp speeds, driving at 130 mph around a race track takes a totally different set of skills. Every driver must pass the official ARDS racing driver test in order to be able to compete in the famous race.

“I can’t say it wasn’t a challenge at times but I’ve enjoyed it very much,” he reported. “I’ve watched too many professionals at work on the race track over the years to feel that I can now call myself a fully-fledged racing driver but it was exhilarating that’s for sure and I’m looking forward to putting my new skills into practice.”

The special star-studded Celebrity Challenge race is one of the highlights of this summer’s Silverstone Classic powered by the AA, which takes place on Saturday July 21, 2012. The event is dubbed as “the world’s biggest classic motor racing festival.” The Celebrity Challenge will raise funds for the Birmingham Children’s Hospital, the Bobby Moore Fund for Cancer Research UK and the RPJ Crohn’s Foundation.

Star Trek fans who would like to see Sir Patrick Stewart race in the event can get full details at the event’s official Silverstoneclassic.com website.