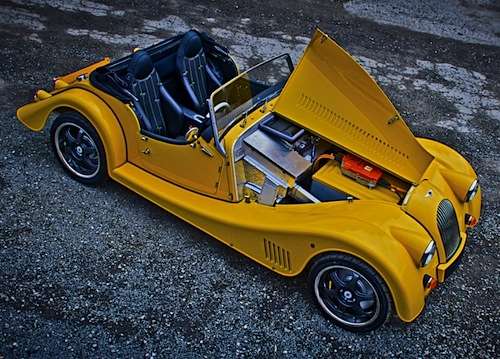 Morgan Offers A Potential Electric Drive Along Its V8 Version

The famous British car maker Morgan has barely changed the styling of its car in a century while modernizing its underpinning to accept a V8, is now introducing an electric version to the Plus family.
Advertisement

You’ve got to love Morgan. Alone against a sea of ever changing cars, where almost every series receives the inevitable “next year’s facelift”, Morgan still makes cars the way they’ve always done… by hand with rare design changes. Morgan understood a long time ago something the automobile industry has forgotten that you do not mess with brand recognition. In other words, when a car appeals to many, don’t change it! That’s why the Alfa Romeo Spider successfully survived almost five decades with little redesign touches and still enjoys a strong following.

Morgan History. The Morgan history is interesting. Founded in 1910 by Harry Frederick Stanley Morgan, the company was run by his son Peter Morgan until a few years before his death in 2003. Making less than a thousand hand built cars a year, the waiting list for a Morgan is a year to two, sometimes even 10 depending on many factors. Early cars had three wheels in the correct configuration of two in the front, one in the back. The success of the V-Twin put Morgan on the radar bleep of aficionados. But it wasn’t until after WWII that Morgan began its distinctive look and added a fourth wheel to its configuration.

From Small Displacement To V8s. The production of a Morgan is a little unusual for modern times but the under part chassis of the body (not the actual chassis) is made from Ash wood and the legend goes that it is guaranteed un-deformable 150 years. No one knows yet… The first engines were small 1.25 liters but quickly grew bigger. Like most other British marks, Morgan didn’t make it’s own engines, borrowing from Standards Vanguards to Rovers. The early ones made it with 50 hp but the newer ones sport V8s pushing as much as 204 hp, or in the case of the Mondeo, as much as 212, which pushes performance and a distinctive British look and feel on these convertibles. Modern Morgans haven’t changed much in design but their underpinnings have. They now sports twin-turbo BMW straight sixes pushing 302 hp for highest pleasure.

Morgan Plus E. Maybe a contradiction in and of itself, the Plus E is the best of both worlds. Die hard, the venerable Morgan stepped onto the other side! To be fair, the company toyed around with a hydrogen model when hydrogen was all the craze a few years ago. Morgan is now working on a more rational electric battery platform with an electric prototype called the Plus E. The Plus E is based on a version of the lightweight aluminum platform chassis clothed in the revised ‘traditional’ body from the new BMW V8-powered Plus 8. The company says that if enough interest is generated from its display at the Geneva Auto Show it will be produced.

Technically Speaking. First things first, the chassis of the body work will not be made out of ash wood as was traditional but a more sophisticated aluminum made by another British company, Radshape. The Plus E will sport a 94 hp five-speed electric gearbox. Yes, you read that correctly, 5 speed electric gearbox although the company doesn’t abandon the idea of using more advanced technologies, such as a sequential five speed box. The Zytek electric motor comes from a company that gave you the electric Elise EV prototype. The company is also very famous in the racing world by being the first one to race hybrids at Le Mans 24 Hour, building the complete race engines platform for the entire race series.

Morgan leaked in interesting tidbit when it said that the Lithium Ion battery pack would be replaced by "alternative battery technologies". We can only imagine Zytek is also working more advanced lithium chemistries, such as air, sulfur or even maybe a mixture of lithium and ultracapacitors?

Nonetheless, what you get here is the original look of a Morgan Plus, with the added advantage of a 100% pure quite torquy electric drive. This is the best of both worlds for those of us who enjoy automobile design with a penchant for yesteryears and all of it, pushed by electrons. All in all, the electric Morgan Plus E is a car we are eagerly awaiting, anticipating good performance as always from the carmaker.