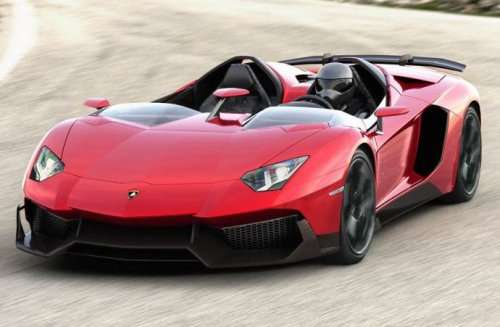 The sexiest car ever to come out of the Lamborghini factory is the Aventador J, a one-off supercar being shown in Geneva - and now it has a price, going to one lucky (and rich) buyer. And that's not all for the J either..
Advertisement

The Lamborghini Aventador J is truly the hottest vehicle to ever come out of the Lambo shop. This high-speed, high-tech one-off production takes a street Aventador and makes it even sexier. As we all know, sex sells. In this case, it sells for 2.1 million Euro (US $2.73 million) to one very lucky buyer.

The car itself is a masterpiece of engineering and hand-crafted design. Our very own Patrick Rall covered that aspect on its unveil, which you can read here. To summarize: it uses advanced carbon and other materials to replace the more mundane (if you can call them that) bits of the original Aventador, and removes a lot of the extras that, frankly, aren't needed in a Roadster. Including the windshield and air conditioning. In essence, it's a stripped down, streamlined, tech-sexy car with the appeal of the most graceful and serious of Italian supermodels.

Its design is best summed up thusly: it's the Lamborghini Aventador J. Saying more would be muddying the waters.

So who is the lucky new owner? Lambo isn't saying, but they are saying that those who admire the Aventador J's looks will soon be able to buy one of its sisters for their own stables. Lamborghini plans to go to production with a more standardized roadster version of the Aventador model, without all the exclusive paint and carbon fiber that take the J from "ordinary" supercar to "uber-awesome."

In another surprise hint, when Motor Authority asked CEO Stephan Winkelmann about a race-ready version of the Aventador, he mulled around the issue without giving a direct answer, opting instead to smirk with a "Never say never" comment.

For the rest of us who will not likely every afford something like the Lamborghini Aventador J, we must be content with voyeurism. Take a peek at the newly-released "making of" video for the J from Lamborghini HQ:

Excuse me, I need to get a cold shower..