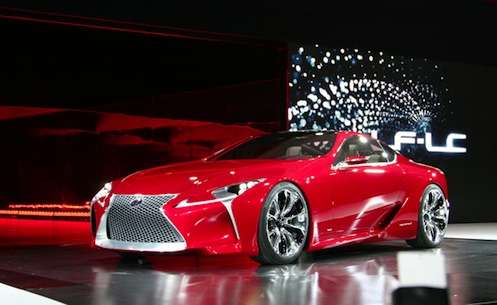 Lexus competes with German rivals by bringing LF-LC to production

The Lexus LF-LC Concept that made its debut in Detroit will become a production model within three years say Lexus insiders.
Advertisement

Ever since Akio Toyoda took over the reins of Toyota Motor Company, he has been on a mission to infuse his car company with a new spirit that comes from his racing background and love for fast cars. The CEO of Toyota knows that he must change the culture at Lexus in order to survive. He has seen his luxury brand, fall from first to third place in U.S. sales behind BMW and Mercedes last year. Lexus insiders told Automotive News, the LF-LC Concept will certainly become a production model within the next three years. This will give him the sports car to compete with his German rivals.

The LF-LC Concept was designed at Toyota’s Calty studio in Newport Beach, California, and is a departure from the brands conservative image. The 2+2 sports coupe would be the first step in transforming the luxury brands image into what Akio Toyoda has in mind. The CEO has seen the tremendous success that both BMW and Mercedes-Benz have had with their luxury performance sports cars, and he knows he must do the same thing at Lexus.

He has even formed a partnership with BMW to develop a new future spots car. "BMW's strength is in developing sports cars," said Toyota President Akio Toyoda, who is a professional racer himself. "I am excited to think of the cars that will result from this relationship." This will give the Toyota brand the sports cars they will need in order to compete, and now Lexus will need the same infusion of sportier cars in order to survive against the German rivals.

Lexus desperately needs some excitement in order to change the image of the struggling brand. Mark Templin, Lexus' global and U.S. chief, said recently: "In the past, we talked about the perfection of our product. But the 'Pursuit of Perfection' idea lacks emotion." The production Lexus LF-LC would be a very good start to bring the passion back to the luxury brand of Toyota.

The 2+2 sports car will likely take 36 month’s to bring it to production if it uses a new platform. But if it shares a similar architecture as the IS-F sedan, it could shave month’s off the time of development. But Toyota doesn’t have the luxury of waiting too long as the Germans are already years ahead of Lexus. Akio Toyoda knows he needs to inject passion into both Toyota and Lexus and he is well under way in seeing that mission accomplished.

When the new Lexus LF-LC sports car makes it to production, an executive told Automotive News Europe that the car would be priced similar to a Porsche 911 Turbo, which sells for more than $120,000. This could give Akio Toyoda the Lexus supercar he has been dreaming of.