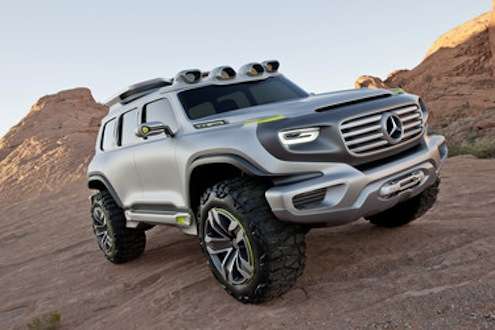 The Mercedes-Benz G-Class icon has been transformed into the Ener-G-Force concept police car of 2025, and gives a glimpse of future Mercedes-Benz off-road vehicles.
Advertisement

When automakers want to test a new design strategy for their vehicles, they build a new vehicle, call it a concept car, and bring it to a world-class auto show. Mercedes-Benz is bringing the Ener-G-Force off-road concept to the 2012 Los Angeles Auto Show and will give the world a good idea of what the future of their off-road vehicles will look. The new concept car is built from the genes of the classic Mercedes G-Class icon that has been an off-roader since 1979. Even though the Ener-G-Force started as a future police car, it reveals far more than just what law enforcement will use it for.

A new vision for the iconic G-Class

When Mercedes entered the Los Angeles Design Challenge 2012 that looks into the future with a quest for the "Highway Patrol Vehicle 2025", they didn’t know it would transform their current design strategy. They thought they were designing a future police car that would meet the needs of law enforcement in the year 2025. While the new Mercedes-Benz Ener-G-Force will definitely do that, the design team began to get a new vision for the iconic G-Class.

Gorden Wagener, Director of Design at Mercedes-Benz Cars said, "The Ener-G-Force is the vision of an off-roader that, while reflecting tomorrow's adventures, also invokes the genes of the Mercedes-Benz off-road icon, the G-Class. Modern and cool, it could also be a clue about a new beginning for the off-road design idiom of Mercedes-Benz". Even though Mercedes-Benz calls the Ener-G-Force concept “pure, rendered science fiction,” the designers were intrigued with what was taking shape.

The team was working at the Mercedes-Benz Advanced Design Studio in Carlsbad, California, and began to think about designing tomorrow's off-roader. While they were designing the police version, the thought of a civilian version intrigued them to the extent that they even built a 1:1-scale model to see if it was plausible. Just like the "Highway Patrol Vehicle 2025", the shape of the civilian Ener-G-Force is modeled after the G-Class.

The future of Mercedes off-road vehicles

But the new Ener-G-Force concept takes a radical departure from the class G-Class and brings it far into the future of what Mercedes-Benz off-road vehicles will look like. Ener-G-Force Designer Hubert Lee: "Of course we wanted to take a clear step forward, but we also wanted the G's characteristic features". The Ener-G-Force has a similar profile, however with a high shoulder line and scaled-down glass areas.

Similar to the G-Class, the Ener-G-Force concept has an expressive radiator grille that incorporates the headlamps, and the LEDs in the headlamps form the shape of the letter 'G', which gives the Ener-G-Force an aggressive appearance. The future off-roader features large 20-inch wheels that give the Ener-G-Force an intimidating stance. It also features a new pull-out compartment where the traditional spare tire would be located for hauling extra equipment without having to open the entire tailgate.

Green power in the future

The Ener-G-Force is green and is powered by hydrogen fuel cells and emits nothing but water. The Mercedes future off-roader has an operating range of about 500 miles and as a result is truly is a green car for the future. The Ener-G-Force stores recycled water in tanks on the roof, and transfers it to the "hydro-tech converter," where natural and renewable resources are converted into hydrogen for operating the fuel cells.

That green power is transferred to the four wheel-hub motors, that powers each individual wheel by using high-performance electronics. A "Terra- Scan" 360-degree topography scanner on the roof permanently scans the surroundings and uses the results to adjust the spring and damping rates as well as other suspension parameters for maximum traction on the respective surface, regardless of whether it is on, or off-road.

The new Mercedes-Benz Ener-G-Force concept will be shown at the Los Angeles Auto Show as a future off-road vehicle, but we are clearly seeing what the future of the Mercedes G-Class off-road design will look like. It looks like those trips to the back-country will be a lot of fun in the future.