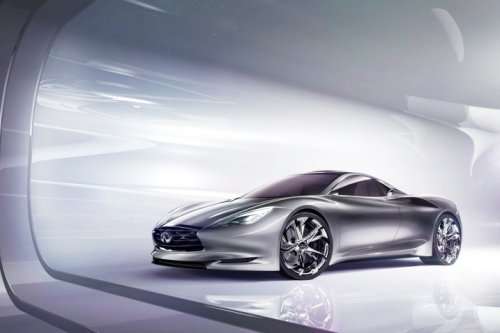 If any of the clap was taken out of Infiniti's thunder over the previously leaked graphics of the Emerg-E, you wouldn't have known it at its unveil in Geneva.
Advertisement

If Infiniti was disappointed about their Emerg-E concept having much of its thunder taken when conceptual drawings were leaked ahead of the show, you'd never have known it at the Geneva Motor Show unveiling yesterday. The company has finally released details of the car's underlying technology, giving just as much hype as the graphics would have garnered.

The Infiniti Emerg-E concept is a hybrid sports car designed as a range-extended hybrid akin to the Chevy Volt or Fisker Karma. It's a next evolution of the Evora 414E concept shown in 2010, continuing Infiniti's collaboration with Lotus.

It's mid-engine design is a first for Infiniti, as are the 402 horsepower said to come from the pair of Evo-made electric motors that propel the car. The Emerg-E has been developed almost entirely in Britain, courting British government funding for its green technologies and carbon-fiber bodywork. Exterior design elements, however, were exported to the U.S. to Infiniti's California design studios, with the concept headed up by Randy Rodriguez. An internal competition between studios, including designs from Japan and Europe, fueled the final, awesome outcome from Rodriguez' team. Details were then completed in London.

The Emerg-E begins with a slightly stretched aluminum chassis taken from the Lotus Evora, from which the drive train was also taken (utilizing tech in the aforementioned 414E concept). A single speed, open differential transmission from Xtrac connects the wheels to the motors, delivering peak torque of 738 pound-feet, giving the Infiniti Emerg-E a 0-60 time of only 4 seconds. Top speed is limited to 130mph in order to preserve battery life and to keep power usage underneath the generation potential of the diminutive 47hp 1.2-liter, 3-cylinder gasoline engine acting as a range-extender at midships.

The engine is designed specifically as a generator, unlike the engines used in other RE-EVs like the Karma or Volt. Lotus plans to market the dedicated power producers to hybrid manufacturers. The engine is extremely efficient and low-emissions, giving the car a 300 mile range, including up to 30 miles from batteries alone.

The original conceptual idea for the Infiniti Emerg-E was to be entirely in-house and based on the company's M35h sedan. When the chance to work with Lotus and to forge contacts with an array of high-tech British and European companies was presented, however, it was too good to pass up. So the alliance with Lotus was formed and the concept evolved to match the new partnership.

From the Lotus Evora, Rodriguez stretched the frame to add an extra two inches to the wheelbase. The mid-engine setup meant a more centered balance, so the designers kept this theme by arraying the battery cells low on the chassis. Interior refinements also played off of the Evora's, but were customized beyond recognition to make it more swooping and elegant while also utilizing the extra space provided by the longer frame.

Infiniti plans to build a pair of working prototypes this year in order to prove the hardware and engineering. Infiniti hopes to make this concept its centerpiece for future designs.