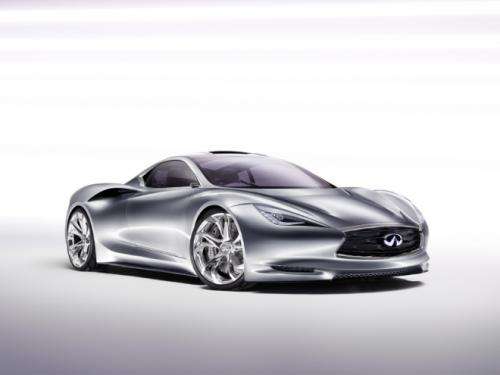 Infiniti plans to unveil the Emerg-E concept at the Geneva Motor Show, but two separate leaks have shown the world the car before the curtain is officially raised. A dozen photos have recently leaked as well as patent drawings from the concept.
Advertisement

Infiniti has yet to remark on the leak of the dozen photos, but it's apparent that an insider has seen fit to let the world know what is behind the hype that the company has been building for this concept's unveiling in Geneva. It appears that the hype was well played, as the car is definitely something to get excited about.

The most striking aspect of the Emerg-E's design, once you get past the Star Trekkish interior (a common element of concepts the world over) is the aggressive, but futuristic styling of the bodywork. The car is a beautiful rendition of the auto stylist's pen, showing deep lines and strong curves to match a low profile, roadster look.

Bezel scoops and headlamps are chiseled viper-like into the muscular front quarters, which accentuates the sloping hood and thin-lipped grille. The lines flow from the fenders and over the doors to top-heavy scoops at the rear quarter. The clipped rear end is wide, giving the car an aggressive stance while the three oscillating openings hint at powerful exhaust and the thin tail lamps squint at those eating the Emerg-E's dust.

The overall profile of the vehicle says "wind tunnel" all over it and is obviously engineered to have slippery movement through the air.

Inside, the instrument panel detail shows Infiniti's plans for an LED or smart screen display across each of the three panel hoods. The steering wheel is hexagonal, adding to the contrasting flowing curves and strong lines of the interior. The shifter detail shows another departure from convention with a hand-grip sitting flat to the central pillar-like bar that splits the driver and passenger. A thumb-hole rest details how the hand will sit on the shifter and pull the slider down to the selected gear rather than moving a knob and stick.

Despite the early leak, the Emerg-E is definitely going to be one of the stars of the upcoming Geneva Motor Show.

According to Carscoop, these images "are official pics sent over by a reader."

Tsingshan's Threat to Tesla: EV Maker Is In Battery Crosshairs
Tesla-Funded Research Reveals One of The Biggest Mysteries of EV Battery
END_OF_DOCUMENT_TOKEN_TO_BE_REPLACED