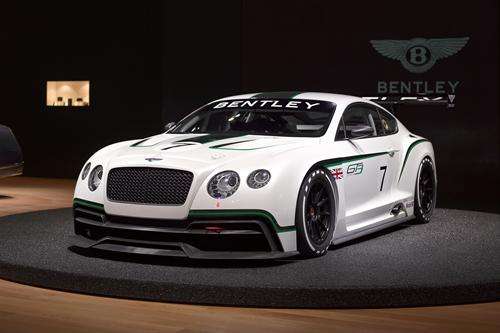 Bentley returns to its speed-demon roots at LA Auto Show

Bentley debuts three vehicles for North America, two of which are serious speedsters, hearkening back to the days when Bentley was well-known for its prowess on the track.
Advertisement

Back in the heady days of automotive yore, Bentley was one of the best-known racing names in the business. It was the British carmaker to beat on the track if you wanted to make a name for yourself. Racing doesn't pay well, though, but luxury coach making can. So, gradually, the Crewe team morphed into the uber-luxury maker we know today.

At the 2012 Los Angeles Auto Show this week, however, the staid British company that is known for its Royal builds has taken off its ballroom masque and revealed some decidedly non-sedate machines. Two race cars, to be exact - a concept Continental GT3 (pictured here) and a new street-legal Bentley GT Speed coupe. There's also a sportier, more driver-focused Mulsanne Grand Touring being debuted in LA, which takes the most elegant of coach-built machines and turns it into a less cushy, more exciting drive.

The Bentley GT Speed
This is not a new car, though it is new to the North American sales region. The GT Speed coupe began selling in Europe in 2008 and has been one of the company's most popular non-estate rides. It is a re-think of the Continental, one of the company's most popular luxury coupe designs in recent memory. It takes that staid, but very drive-able cush-car and adds some tuning, serious suspension changes, and some sportier style additions to take the Continental into new realms of speed.

The car already had a throaty, high-performing W12 under its hood - Bentley is the largest producer of 12-cylinder engines in the world - a good start for any powerhouse. Now, the car debuting in LA as the GT Speed is capable of 205 mph with its foot-numbing 616 bph output and 800 Nm of torque (590 lb-ft). The ZF 8-speed close-ratio automatic transmission allows all of this raw power to be smoothly translated into a 0-60 time of only four seconds and 100 mph in just 9. All on a sport suspension that would allow the driver to sip his morning brew while achieving these breakneck speeds.

Not surprisingly, Bentley expects this street-legal luxury fire-layer to sell well in the North American market.

The Bentley GT3 concept
Also based on the Continental, this is basically the track-ready version of the GT Speed, which the Crewe racing squad is calling the GT3. Basically, they've taken the bladder-shaking performance the GT Speed already possesses, stripped off all the road-legal extras, added some racing decals, and made a few adjustments for the track and plan to turn it loose on unsuspecting pavement in a Gran Tourismo race venue sometime towards the end of next year.

Screaming GT fans and competitive racers in the field.. you have been warned.

The Mulsanne Grand Touring
Finally, the elegant Mulsanne will also see a little GT love, enhancing the driver-focused luxury car's strengths even further. This is the flagship of Bentley's line and in Los Angeles, they're showing a more modern look for the already-distinctive driving machine. Underneath, it has a sports-tuned and driver-selectable suspension and steering platform. With the 6.75-liter V8 that powers it, this means an even more driver-focused cruiser. Outside, the new Mulsanne MDS has unique 21-inch alloy wheels and wing vents in the Bentley Flying B look. The cabin also showcases a Diamond Quilted leather trim.

A nice uptake on the already beautiful Mulsanne.