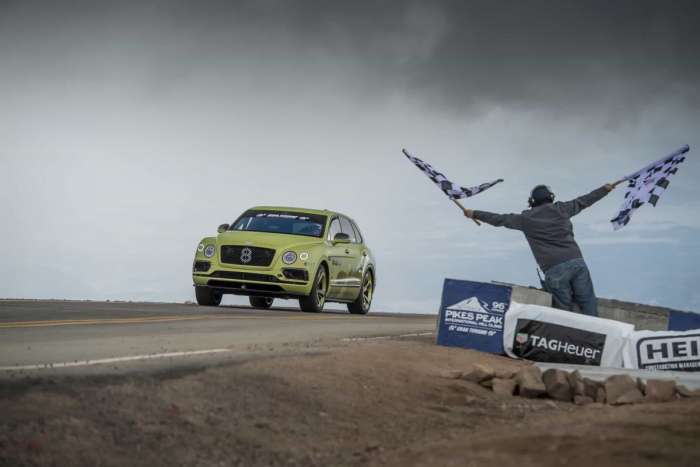 Following Volkswagen's historic win in an electric vehicle Sunday, the automaker's Bentley subsidiary also set a new market for SUVs. It, too, crushed it.
Advertisement

While a Volkswagen branded vehicle set a new overall time for the Pikes Peak Hill Climb, another VW subsidiary set a record in another category – SUV -- as it took the win for the division.VW I.D. R takes the electric record, crushing record. A Bentley Bentayga claimed the outright record for a production SUV in the century-old event.

Rhys Millen, a two-time champ, was at the wheel of the Bentayga and completed the 12.4-mile course in 10:49.9. Like the other VW entry – the I.D. R Pikes Peak – the new mark is light years ahead of the former time. Indeed, the Bentayga crushed the previous time by nearly two full minutes, averaging a speed of 66.5 mph.

The Bentayga overcame nearly 5,000 feet in the height and went through 156 corners to achieve its result. The Bentley deployed a unique combination of a 600 hp W12 engine, adaptive air suspension, active electric 48-volt anti-roll control and carbon ceramic brakes to set its new benchmark.

Speaking at the automaker’s Crewe, England headquarters, Chris Craft, member of VW’s board for sales and marketing, said:

“The record proves the outstanding dynamic ability of the Bentayga – demonstrating again how Bentley Motors is the only automotive company in the world that can combine pinnacle luxury and breathtaking performance.” He congratulated the Bentley Motorsport team as well as Millen and his team.

Millen, speaking immediately after the race, commented about the “incredible machine.”

“To take a luxury SUV, with minimal modifications, and be able to drive up this course in under 11 minutes is a huge testament to the performance and level of engineering in the Bentayga. I had a great run – the car was planted all the way up and gave me the confidence I needed to push hard. I’m delighted to take the SUV record for Bentley and everyone involved in this project.”

The Bentley Motorsport engineers took a standard production Bentayga – to comply with the rules. Then, they stripped out and replaced the seats with racing versions. A roll cage and fire-suppression system replaced the rear seats.

The team used Pirelli’s DOT-marked range and a production – specification Akrapovic sports exhaust was fitted. In every other way, the Pikes Peak car is a standard Bentayga.