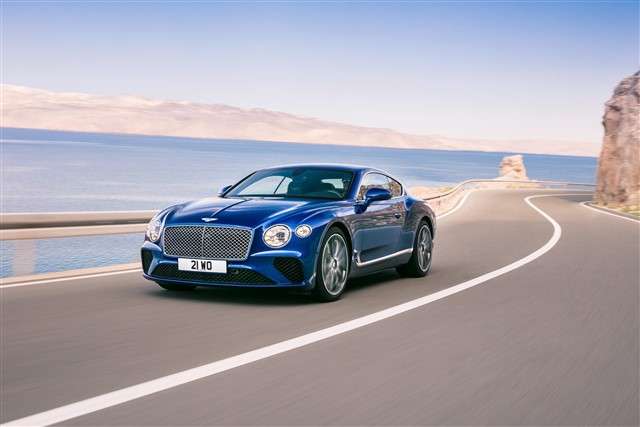 Bentley brought a group of auto journalists to its headquarters at Crewe, Great Britain, and showed off one of its latest developments, the 2018 Bentley Continental GT. The GT features a host of exciting new features including some rather unique uses of technology.
Advertisement

When the public has a chance to see Bentley’s Continental GT at next month’s Frankfurt Auto Show visitors will see a third-generation version of the prestige marque that combines performance with hand-crafted luxury and cutting-edge technology. Bentley Goes Super High Tech With Continental GT

Wolfgang Durheimer, chairman and chief executive of Bentley Motors, a luxury subsidiary of Volkswagen, said the automaker “has been at the forefront of luxury Grand Touring for nearly 100 years.” The Continental GT “is the pinnacle of our design and engineering achievements and markets the next step in Bentley’s journey.” He spoke with automotive journalists at Bentley’s headquarters in Crewe, Great Britain, this week.

Six-liter W12 has been enhanced

At the heart of the new Continental GT is an all-new enhanced version of Bentley’s famous 6.0-liter twin-turbo W12 TSI engine. For the first time, the 12-cylinder engine mates to a dual-clutch eight-speed transmission which yields faster, more efficient gear changes.

The mild-hybrid Continental GT uses an intelligent 48-volt Dynamic Ride System. The system ensures not only a responsive ride but also exceptionally responsive handling in all conditions. Passengers are sure to like the well-damped ride. Bentley controls the luxury vehicle’s lateral roll, cushioning passengers from excessive movement, as well as making the luxury marque feel effortlessly precise.

“We are the world leader in luxury mobility,” Durheimer said, “… Our products and services define new luxury in the automotive world. The new Continental encapsulates our desire to innovate as well as celebrate our heritage and take the Bentley ownership experience to the next … level.”

Bentley relies on its Design DNA for its exterior design. The program has resulted in a muscular exterior design that yields a lightweight but stiff body. To improve weight distribution and handling, the engine has been moved back for better weight distribution. The exterior makes use of new materials and results in significant weight savings of the previous Continental. While it retains the classic elegance of its predecessor, the new model is more sculptural and sharply focused. Bentley says it takes a lot of inspiration from the critically acclaimed EXP 10 Speed 6 concept car.

The Continental GT is the first production car to have an entire body side made from the Super Forming aluminum process. Super Forming is a precision technique where aluminum is heated to 500-degrees C allowing designers o use more complicated sharply defined body lines and a more sculpted look. Super Forming was used previously on Bentley's fenders.

The overall Continental GT profile is longer and lower, due, in part to the positioning of the front wheels further forward. In turn, the Continental GT features a longer hood and lowered nose. However, the key signature line of the original is still there from the headlights out through the tail. Bentley has used a radical styling departure, with the taillights now shaped like ellipses, reflecting the shape of the tailpipes directly below them.

Moving to the interior, the Bentley tailors the passenger compartment to the modern luxury customer, the automaker says. Designers have paid the type of attention to detail that results in effortless ownership.

The cabin integrates cutting-edge onboard technology with the best materials, and the result is a luxurious space that is harmonized and connected.

Luggage capacity has been improved

An advanced, fully digital, driver focused instrument panel and Bentley Rotating Display (driver) are among the innovations. It features an impressive 12.3-inch touchscreen, housed in a three-sided, revolving unit. There is also an elegant set of analog gauges.