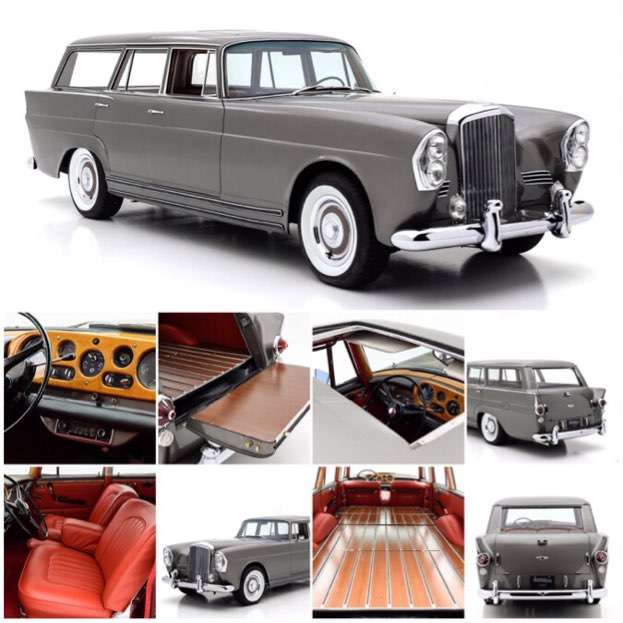 What do you have when you mish mash a 1960’s Rolls Royce, Bentley, Mercedes, and Buick? Some say a mess. Others say an exquisite and functional example of fine bespoke automotive engineering to be considered artwork to be displayed in a museum. I’ll let you be the judge.
Advertisement

On classiccars.com a rare unusual, some say weird, others say exquisite automotive example went up for sale. It was a Bentley Station Wagon on an LWB Silver Cloud frame made by Bentley. That’s odd enough. Here’s the thing: it kinda looks like a 1960s Mercedes with a Bentley grille and Buick taillights. This is the 1960 Bentley S2 Shooting Brake. It’s one of a kind literally. The Bentley Rolls Royce Silver Cloud LWB Station Wagon with Mercedes Benz fishtails, body, dash, and US spec’d headlights, and Buick Skylark rear end with taillights. All branded Bentley. Confused already?

At the auctions last summer during Car Week at Monterey, one of the listings presented and also still listed as of this writing on classiccars.com, is the most unusual vehicle of hybridized welding of different brands ever to be put into bespoke production. It is the only one in the world to exist and was recently put up for sale. It is a “one-off.” One-offs are the kind of cars any manufacturer produces but only makes one or two or few of them and that’s it.

Most times it’s a working prototype to give car executives and engineers an idea of what the final and ultimate production car will look and feel like, the ones you and I drive. That’s how our cars started. I can’t begin to tell how many of those cars go into the crusher once they’re done with them, especially nowadays as many of these cars are not made with safety equipment that would make them dangerous on the daily road. But it’s still a normal functional car, and probably a painful sight to watch them go into a crusher, the ancestor to the paper shredder.

I recently wrote a piece about the Lincoln Continental and the most glaring example I can remember of a perfectly functional car having a short life after serving its purpose to be crushed, was a gorgeous blue on blue 1964 Conti Pillared Top that was rushed from the Ford Wixom assembly plant to the set of James Bond’s “Goldfinger” to go into the crusher after Odd Job killed a victim and needed to get rid of the body in the backseat. For Odd Job this must’ve been an easy solution, for the rest of us, painful to watch:

Another kind of one-off is a prototype vehicle used for display or as a concept vehicle to give executives and in the case of car and auto shows, the public of what the manufacturer was thinking or envisioning for the future. Many of them are far flung. I don’t have to tell you about the many interesting and ugly electric and autonomous cars you’ve seen. It’s only when they get close to production do electric and autonomous cars start looking normal.

Some of them take a rare turn like the 1955 concept Lincoln Futura becoming Adam West’s Batmobile. The only and original Batman and the real Batmobile. As far as I’m concerned like the many concept cars that also get crushed, the movie Batmans were throwaways portraying the real TV Batman, and now real Batman is dead. He passed away not long ago.

And the other kind of one offs are customized bespoke made to order ones, like this Bentley. Few manufacturers will do this as depending on the request it costs a lot of money and human resources to hand build a car from the ground up in a particular way. Like this Bentley, there are certain builds you just can’t put on an assembly line to save money and time. To take a production car off a drawing board to full production costs about a billion dollars. In that process is miles and miles of testing with prototypes and test mules in different parts of the world and climates in some cases. It takes years.

But some manufacturers are prepared to make to order, though some may not publicize it, if you flash the right amount of cash. And a few of them have special facilities for these kind of projects, usually where they build their prototypes, to consider such requests.

The highest profile example of this is the president’s state car. For many years an American manufacturer was chosen to make one then down the road two cars, “stage coach” and “backup,” for the President of the United States. FDR’s “Sunshine Special,” or JFK’s “X-100” assassination car, are two famous examples of one-offs. I recently wrote about how Lehmann Peterson was outfitting presidential Continentals in the 1960s after the JFK assassination. Nowadays the Secret Service commissions a manufacturer to make about a dozen cars every four to eight years as needed. About $1.5 million USD/each in a contract worth about $20 million. GM is equipped to do this.

The glaring example of bespoke capable manufacturers is of course Rolls Royce and Bentley, back in the day, and now. We Americans never really caught on to the “land yacht” dynamic, as we’re used to buying off the rack no matter the item or expense. Especially with cars, we buy from stock, willing to wait a month from the factory, unless it’s a Tesla, three months to a year for a bespoke car is just too intangible for most Americans. We want it now. This is part of the reason why, understandably, waitlisted Teslarites became impatient. But customizing a bespoke car is what these two brands are about: taking whatever the seacraft builders do, and do it to the car, starting with “the commissioning.” And while both industries produce off an assembly line or process, the two British brands are prepared to make things from special requests.

So here we have this rare Bentley Shooting Brake.

About the Original Owner

You would think counterintuitive to this case, that the original owner who went through such painstaking detail to remain anonymous when commissioning then years later donating this car would prefer to drive something more nondescript to enhance his anonymity. I certainly understand and appreciate his motives for having a wagon that suites his needs and tastes. Who knows what he was thinking or his motives were when buying and ridding it.

But Bentley respects their customers’ privacy, lets keep in mind who they cater to, to put the owner’s name in their logbooks and build sheets as “anonymous.” The original owner referred to hereafter as anonymous or he/him, first started years prior with wanting Daimler to supply him with a customized 300 wagon. They declined the offer, so he bought stock and handed it over to Wendler Karosseriebau, the German coachbuilders, and they seemed to customize a wagon for him that apparently suited his needs considering the circumstances. And he apparently got good use out of it as he eventually needed to replace it.

Wendler has been coaching things from trucks at first to Mercedes down to Fords starting100 years ago, some may look at this car to tell them they should’ve went back to doing just trucks, others may say they can coach a rainy day.

In this case all anonymous wanted from Daimler was a 300 frame and they refused, I couldn’t find why in both cases, so this time he went to Bentley who set him up with a build to hand off to Wendler.

This car is no fly off the shelf ad hoc improviso. Looking at the pictures, especially in the interior and engine compartment, you can tell that a lot of thought, detail, skill, and craftsmanship went into this car. The reason why it looks odd is because we’ve never seen a car that looks like this. At least we have an idea of what a combination of a Mercedes and Bentley looks like.

Anonymous was lucky Bentley was able to do this without him waiting another year. They only had six frames available in 1960 to make space for a decent sized shooting brake. Otherwise those six would’ve became limos or hearses as they probably did.

Wendler is the one actually that should take credit for this build and the quality applied. They carefully grafted the body of a W112 300 SE onto that S2 LWB frame and any issues of conflicts, overlaps, gaps/shortcomings, or inconsistencies were addressed by a skilled metalman who used hand fabricated parts from scratch to make that car look like it was made original for mass production.

A station wagon is a very American thing, and you can tell Wendler is attune to this. This car was meant to be driven on American roads, and Wendler was going to cater to their American based customer. Say what you will about the exterior, it’s inside where all the eggs to the Fabergé lay. The Europeans like to use dark woods like walnut or mahogany for car interior veneers, Wendler chose oak for the wood fittings, front and rear, and when you open that lift gate you could swear you were looking inside a luxury branded top of the line American estate wagon imported from Detroit.

Not forgetting the car’s soul is a Bentley, Wendler went thru painstaking detail to install a 300 dash with oak but reconfigured the Bentley instrumentations to 300 style. The Connelly hides from the restoration clearly tugs at us to let us know Rolls Royce was in the house, give it a shout out!

On the outside clearly Wendler wanted a fusion of both contributing brands on equal terms to meld a Bentley with a Mercedes. The headlights scream of US spec’d 1960 300 SE. The hubcaps, the flying B branding on the rear, on the obvious Bentley grille, identify the car’s foundation. The fishtails in the back are common for the period, but unmistakably Mercedes. And here’s the thing, they used 1960 Buick Skylark tail lights also used on the Invicta wagon to make the rear similar to Buick’s mid level station wagon below LeSabre Estate. It’s when you pull up close behind to see that Bentley badging that you start saying to yourself “what the —.” Pretty clever.

Clever however is not the price, and here’s where the owner makes you pay for parking something on your driveway the Joneses next door can never compete against with a better model that this is actually a museum piece: $575,000 USD and it’s yours. For decades it was in a museum. It was cut loose back into the wild. If a private collector picks it up we may never see it other than in these photos ever again.

The interesting thing is, the way we’re going with gasoline cars, this might be the last few years or decades or sooner you’ll be able to drive it on the roads unfettered, and this so rare this isn’t something you should just convert to electric power. The equivalent would be to turn Karl Benz’ Motorwagen into a BEV. It misses the point.

Beauty is in the eyes of the beholder. Uniqueness is what actually in many ways makes this Bentley priceless.

Photos are from the listing on classiccars.com

What do you think of the 1960 Bentley S2 Wendler Shooting Brake? A white swan or ugly ducking? Let us know below!