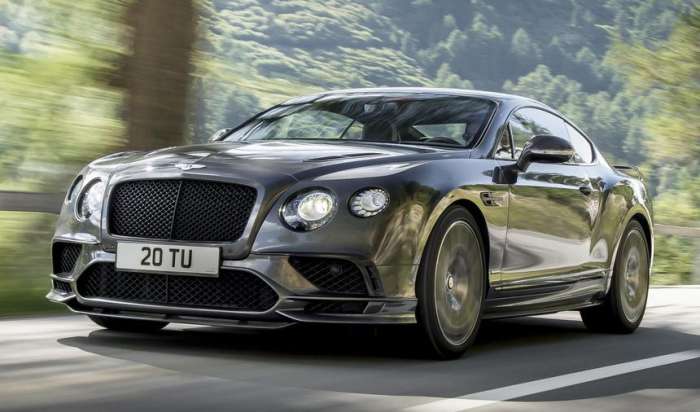 If you were going to build the fastest supersports car around, how would you do it? Well, you don't have to as Bentley has already performed the task for you. The result is faster and fastest.
Advertisement

When you look at the specs for a marque, and they say it moves from 0 to 60 in 3.5 seconds, you think that the vehicle in question must be a two-door mid-engined hypercar that is made of all kinds of exotic material to keep the weight down and power up.

Well, that is the conventional wisdom among the Ferrari, Maserati, McLaren – and other – crowd. But, here’s the thing, it certainly doesn’t have to be. What would happen, do you suppose if you were to take Bentley’s reliable – and practically bulletproof – W12 powerplant, tweak it a bit and add stronger turbos with better cooling?

If you were to do that and then put it into a Bentley Continental, you would have the fastest high-end supersports car on the market – bar none. This is the Conti that visitors to this week’s Detroit Auto Show have seen from the British builder.

The 2017 Bentley Continental Supersports, after the tweaking, now screams out 700 horsepower and 750 pounds-feet of torque. It’s certainly more than enough power to rip up more than a little tarmac as the powerplant spools up to power. Look for it in the first quarter of the year.

The changes put the Conti at the top of the automotive power pyramid. Indeed, it not only takes down the competition, among which is its sibling, the Continental GT Speed but also the RR Wraith and the Maybach S650. Specifically, the competition and specs are:

Paul Jones, Bentley director of product management, said the first-gen Continental Supersports was successful so bringing it back didn’t require much effort. “It has achieved a sort of cult status,” the Bentley exec, told Motor Trend in a phone interview. “It’s positioned as sort of a pinnacle grand tourer. It’s the ultimate balance of luxury and performance.”

Since the familiar 6.0-liter twin-turbo W-12 powerplant isn’t too stressed in the base model Conti GT – 582 horsepower and 531 pounds-feet), the developers decided to fit the Supersports with larger turbos while adding capacity to the cooling system. The result is the monster Conti.

Under the body metal, there still beats the W-12 and the eight-speed automatic (also used in other vehicles across Volkswagen of which Bentley is a subsidiary) as well as the unique all-wheel-drive system that puts more power to the rear wheels than the front, resulting in Bentley’s quickest picker-upper. Estimates put the 0 to 60 mph time at 3.5 seconds – though they expect it to be quicker. Other examples of faster Contis include the GT3-R that booms through 0 to 60 in 3.6 seconds when being driven a tad more conservatively. More aggressive driving yields 3.3-second times. The top end on the Supersports, by the way, is 209 mph, definitely hypercar territory.