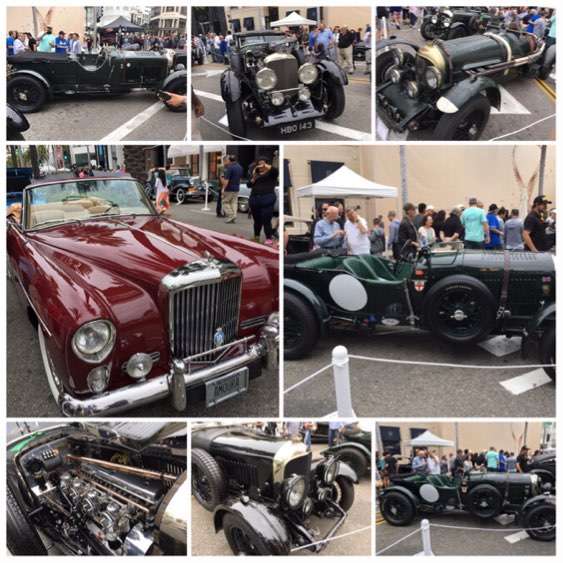 For the last 26 years the City of Beverly Hills LA holds a Father’s Day treat for families by hosting a free classic car show on its own storied swanky 5 Avenue Main Street, on Rodeo Drive. This year’s theme was the 100th anniversary of the founding of Bentley Motors Ltd, and Bentley was in the house, and on the Drive!
Advertisement

I’m a Bentley aficionado, and I often tell people the storied history that needs to be told among the top tier luxury car brands, is not Rolls Royce, but rather that of Bentley: it would make a fascinating dramatic movie if well done. What a remarkable 100 years that’s been given to Bentley Motors Ltd., the storied car company whose historic plant lies on the English countryside of Cheshire Crewe, Great Britain. And today the City of Beverly Hills, California wanted to celebrate Bentley’s centennial by featuring historic legacy Bentley cars on Rodeo Drive for the occasion.

When Bentley Motors, Limited was founded at the location of their first plant in Cricklewood, not far from London, on January 18, 1919, a 21 year old Walter Owen “W.O.” Bentley and his 2 year senior brother, Horace Millner Bentley, two well heeled boys from Hampstead, London, came straight out of WW I.

What else would two boys want coming straight out of a war, other than women, but to race cars? But these two also wanted to build them, which makes their story unique, because they eventually did! By then they were used to building motor car and aircraft engines out of “aluminium,” and taking their engines and using frames made by the Duesenberg Brothers in America (another storied car company name) to race cars on both the European and American Grand Prix race circuits.

When the Cricklewood factory was up and running, if you were a head of state or a London banker that ordered a luxury grand tourer from young Mr. Bentley, and wanted to see the progress of your car, this young baby faced wet behind the ears looking young man would greet you at the factory door. That was Mr. W.O. Bentley himself. The rest as they say, is history.

That was 100 years ago, now fast forward to now. To get a concise history of Bentley’s centennial please check out my feature story on Bentley’s history and their commemorative Mulsanne saloon. For the 26th Annual Beverly Hills Rodeo Drive Concours d'Elegance this year , it was all about Bentley as an awesome display stretched along Beverly Hills’ most storied Avenue.

Among the display were two 1928 Bentley racers, a 4 1/2 and 4 3/4 Litre, both used during the height of Bentley’s participation on the international Grand Prix race circuit. There was also a rare bespoke 1950’s S Series Continental drophead coupe in a gorgeous red colour (mind you I’m writing in British).

Poor management and the crash and depression of 1929 led Bentley into receivership in 1931, and that’s when First Baronet Sir Henry Royce of Rolls fame decided to stifle his competition by buying Bentley Motors to make it a second string Rolls Royce. Among the first things Sir Henry did was confiscated Mr. Bentley’s storied personal 8 Litre Saloon as collateral and pulled Bentley Motors from all racing circuits that lasted for over 80 years. One of the first things VW Group did when they acquired the brand in 1998 was to restore Bentley to the Grand Prix. Bentley now competes with Rolls toe to toe, and some say, even better than Rolls Royce.

The Rodeo Drive Concours d'Elegance is an annual event that’s free that’s become a Fathers Day LA tradition and I encourage all that visit SoCal to go and enjoy, as it’s free.

For my live Facebook coverage of the car show go here: https://www.facebook.com/Sgtalstrafficticketblog/videos/422861304966518?sfns=mo

Al Castro, that’s me, took all these pictures. They now belong to Hareyan Publishing. Regardless, they are all published here and all under Section 107 of the Copyright Act 1976, allowance is made for "fair use" for purposes such as criticism, comment, and news reporting. Please ask my publisher for permission to use these pics. Please.

And please keep in mind that the opinions expressed here are solely mine, and not those of Hareyan Publishing or its employees, which include my staff colleagues.