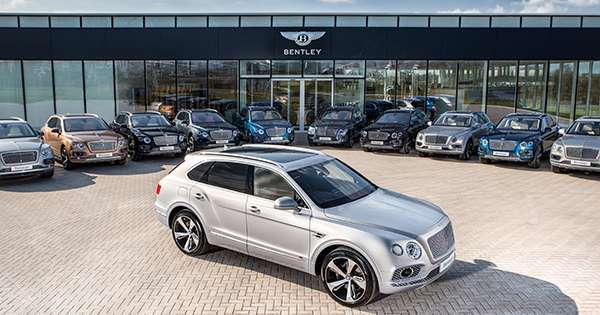 More Bentley Bentayga Models Are In the Cards

The Bentley Bentayga is the British automaker's most controversial models. But it has also become one of its most successful with 5,600 models built - they orignally projected to build 3,600 this year. This has Bentley thinking of growing the Bentayga family.
Advertisement

Bentley already offers a 6.0L twin-turbo W12 and a 4.0L Turbodiesel V8 (only for Europe). 2018 will see a plug-in hybrid variant come out, so what comes afterward?

Autocar reports that there are three body styles in contention. First in 2019, Bentley could launch a coupe-styled Bentayga. 'Could' is the key word as it has to be approved by Volkswagen's board.

“I’m confident that it will happen and our team is working on the case for this car, but it is not yet approved for production. We are the first in the luxury SUV space and at the moment unopposed, but there are lots of rivals coming to the sector. The question we need to answer is if there is space for all these different bodystyles,” said Bentley CEO Wolfgang Dürheimer.

Number two is a long-wheelbase variant aimed at markets such as China and the Middle East. This model is currently under development.

“In the Middle East and China it is almost exclusively what we sell. Those markets have shown what is possible and it makes business sense; the engineering is not rocket science, but it is expensive because when you change components like the side panels and roof you add a lot of cost,” said Dürheimer.

Finally, there is the possibility of a high-performance Bentayga. As we reported back in April, Dürheimer mentioned this was a possibility. Bentley head of engineering, Rolf Frech said this model is under consideration, but would likely be a limited edition model.

“If we have enough people who want the car, and they are new to the brand rather than people who will choose this Bentley rather than another one, then we will consider it,” said Frech.

If Bentley goes forward with this, we expect that it would use a retuned version of the 6.0L W12.