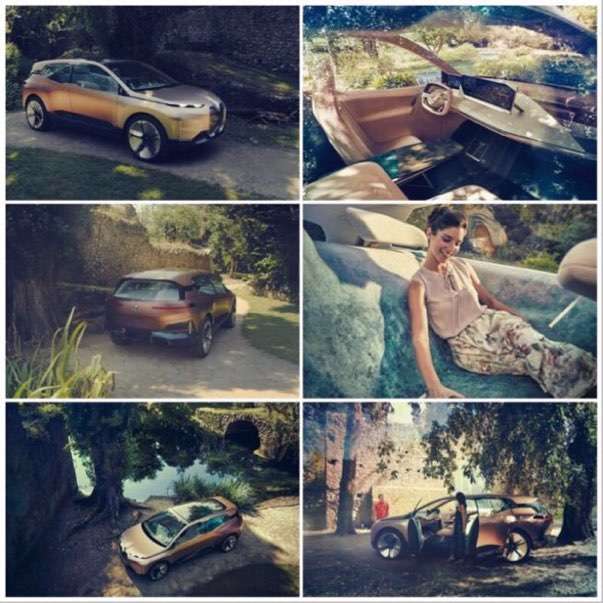 Instead of going over the top like most car makers do, especially startups when introducing autonomous technology in their concept vehicles, BMW took a more practical approach recently with theirs, called iNext, a new electric driverless capable concept CUV but still a human hands on driving car which includes a steering wheel and pedals. So practical they intend to put something much like it into production in as little time as in 2021.
Advertisement

BMW recently launched a four city airport tour for the unveil of their practical working electric driverless crossover they’re eager to put into production by 2021 (or at least a good chunk of the car). It was held top secret over 5 days inside a cargo plane in four cities: Munich, New York, San Francisco, then Beijing:

It looks like car companies, at least some of them, are finally listening to their potential customers by backing off the silly ridiculous driverless car concepts, some looking cartoonish I’m sure you’d agree, and come out with a practical working driverless concept car most likely we’d buy. And BMW seems to be one of those that at least is starting to get it.

Here comes iNext, most likely what our first electric autonomous car will look like when BMW plans to put something like it into production, and this is the important part, when autonomous technology is fully implemented and then integrated into things like our laws, regulations, and infrastructure. Remember we’re maybe halfway through the electrical implementation and integration, being generous. We’re still a bit of the ways there with that and much more with autonomy. But three years is nothing from the lightning speed we’ve already experienced.

One of the first things you’ll notice on the outside about iNext is, other than branding and design, how familiar and somewhat normal it looks. BMW is no fool, they do this on purpose not just for that, but in that familiarity it looks similar to current production i3 in a larger four door CUV variant that this isn’t something you’re going to launch into outer space. Doing this gives customers something to grab hold of in the future, something they can relate to, something that won’t intimidate them when it comes to the future, and driverless technology.

It looks like a real car for a change, a car they already make, a car they will actually make, a car we can actually buy. And it’s a BMW, which for their fans and customers, I’m sure is reassuring as we can have coffee cake in the back then deactivate autonomy to probably whip it around Nurburgring like it’s in a parking lot.

The next thing noticeable, and where the focus of the reveal was all about, was the interior. Knowing nothing about autonomous technology one could see this is not an ordinary car, and it was designed purposely for the occupants to engage in something while the car is either driving or parked, much like a camper. Similar to a bespoke car with out the veneer wood and leather, carefully textured fabrics are laden all about the cabin, even on the dashboard that you know helps with both acoustics and exterior sound deadening.

You can tell that the interior was designed to facilitate social engagement with other occupants, as if there is a living room effect. BMW calls all this, from fabric selection to seat, table, steering wheel, and pedal placement, dash screens, even ambiance as “Shy-tech.” It’s all about getting the occupants to sit, relax, enjoy.

A center console is replaced by a wood table that could double as a coffee table or writing or eating surface. The steering wheel is smaller than usual to mitigate its presence, and the pedals it’s used with, retracts into the dash, the pedals flat into the floor. The headrests to the front seats fold way back over themselves, so that front occupants can more easily socially engage. Welcome to your other living room, this one on wheels.

The minimalist movement in auto design history flourishes in the roaring 21st century twenties, started by the Tesla Design Studio, as the simple driver’s display and a larger accompanying display next to it with the tiny wheel are all the clues needed to tell this is a car.

This is where BMW got to show off what they’re made of. Their engineers are working on adapting their letter formation writing a driver does on the present onboard display via the center console dial into the wooden surface of the table. They’re also trying to enable this on all the fabrics inside the car.

They got this wicked projector screen technology that a beam emits a light of images that connects with this cardboard like sheet similar in size like the one found in shirt packaging, and follows it all around in any direction you move it. The light never slips off the sheet. You use this cardboard screen as a tablet computer.

Of course BMW intends to adapt all of these features somehow into the existing lineup, but it’s giving everyone a flavor of what’s to come when you can truly take your hands off the wheel and let the car take over. This is a concept. But they say this is pretty close to what they intend to put into production by 2021.

Now for the Realities of Autonomy: A Wakeup Call

I hate to crash the party, but for the sake of public safety, let me interject here and predicate all of this. Just because a level 4 car may be on the market by or as soon as 2021, doesn’t necessarily mean it’ll be available everywhere for sale, and where sold, doesn’t necessarily mean you’ll be able to use it everywhere. Even in most places, most likely depending on what part of this country you’re using it in, don’t be surprised if you can’t fully use it at all. Like Cadillac’s Cruise System, level 4 autonomy works very similarly. Its AI system detects road conditions first to see if autonomy is optimal. If not, it will not activate and will leave command of the vehicle to the driver. Because of the poor road conditions alone in this country, expect that to be the norm. When you start out and punch in your route, the system will already know if it can handle it through pre-routing, and will tell you whether it will or not. Like Cruise, I expect this system to work without interruption or impediment on a clear clean well paved well marked Interstate or well cared for state parkway for this feature to work as intended. Show of hands out there: what part of the country will you find such a roadway? Just as I thought. This is why Europe and Asia will enjoy these cars better and earlier than we will, and why I say across my media platforms we have a long way to go before a vehicle like this can be fully utilized in this country. It’s so sad. But true.

I’m the meantime BMW is reassuring customers they’ll have a full range of vehicles in different variations and powertrains to adapt to demand, trends, and regulations as they go through the next decade, as you can’t deny like Mercedes, BMW does have an impressive model range, while some say the brand and driving philosophy of each gets muddled with the volume of cars in each range.

I’m glad they took this approach, finally, to autonomous conception, because people as they are, are going to have a tough time adapting to autonomy. It’s one thing, particularly for Americans, to get them to adapt to electrics. To have them let go of the wheel for a robot, is something else.

How do you feel about iNext? Let us know below!
Images courtesy BMW Media

DeanMcManis wrote on September 17, 2018 - 1:53pm Permalink
Outside it looks fine. But is that an aqua shag carpet hot tub in back? Groovy.

Elon Makes a Cybertruck Statement With an Action, But Quiet in Words
Tesla's Record Month in China: Doubled Registrations in March 2021
END_OF_DOCUMENT_TOKEN_TO_BE_REPLACED