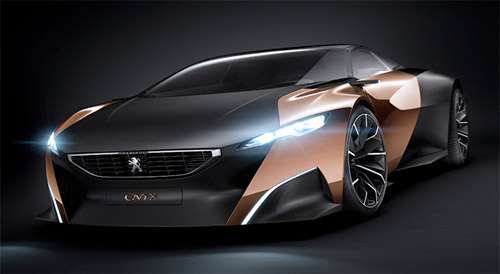 Most car enthusiasts are enthralled with the idea of driving a true racecar on the street – it is the basic concept all supercars are based upon and the Peugeot Onyx will only get those hearts racing.
Advertisement

Peugeot has produced a car that truly embodies that fantasy and while drop-dead gorgeous and fabricated from raw materials, the Onyx develops 600 horsepower from its diesel engine while matching the Toyota Prius with 50-mpg.

The car was designed from such true enthusiasts who apparently are aware of how much it costs to keep such a dream car on the road.

To anyone smitten with the true essence of the sports car, it will be love at first sight.

The voluptuous bodywork enthralls with contrasting materials and shifting colors. The fenders and doors are handcrafted from pure copper sheeting by a superior guildsman. The brassy reflective metal is an ever-changing work of art in progress, as its appearance will change to patina with time. The Onyx is a living work of automotive art!

"The silhouette of the Onyx has been carefully and sensually sculpted, yet it is also vivacious and cutting-edge,” emphasized Sandeep Bhambra, Onyx exterior designer.

The frame is revolutionary, developed by Peugeot Sport and the Group's research and development teams, comprised of a single carbon-fiber mass connecting only 12 parts. The innovative HYbrid4 technology recovers energy during braking to extend the vehicle’s efficiency.

The electric energy, stored in a lithium-ion power core, adds 80 horsepower to the 3.7-liter V6 diesel engine, while using less than 4.5 lbs per hp, the Onyx achieves stunning performance without denigrating its purity and elegance.

With a staggering total output of 680 horsepower to the rear wheels through a six-speed sequential gearbox, this car sips fuel like a Prius, but performs like an Audi R8 V10! Remarkably, that is part of its magic – 680 hp in a car weighing 2,420 lbs.

Holy acceleration, Batman! That’s about the same weight as the Sunbeam Alpine I drove during my 18th summer – it had a four-cylinder engine, but nowhere near the horsepower. It had 1592 cc and only as much power as the Onyx’ electric motors – 80hp. I shudder to think of the trouble that car would have gotten me into with 680 horses.

The passenger compartment is bathed in dazzling ambient light, with the efficiency of the interior materials following the lead of the bodywork – using only what is needed and nothing more.

"We looked for materials fit for a supercar, but in the end they imposed themselves by their obvious suitability. Carbon for high performance, copper and crystal for tradition, natural felt and paper that we handle everyday,” said Sophie Gazeau, Peugeot Colors & Materials Designer.

Using compressed and stretched felt, the passenger compartment is a unified cockpit, lacking seams or joints. It is a true environmental cocoon, enveloping its occupants with soundproofing, flooring, the display console and headliner, which were formerly all separate entities, fittingly furnished with bucket seats.

The console is an epiphany of craftsmanship and expertise. A crystal piece, provided each model by a master glassblower is actually a fragrance diffuser – after all new car smell doesn’t last forever.

The essence of the car and become one with the driver in this exceptional interior. Whatever perfume is placed in the crystal, diffuses through the compartment, channeling the symbiotic interior design.

Of course with its copper doors and fenders, we’re not sure we’d want to park it on the streets of most US cities, but with a nice secure garage – it’s only money after all and you still can’t take it with you.