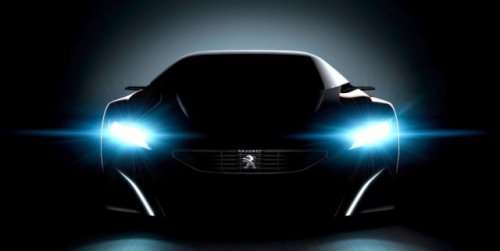 With the release of a 24-second video and a handful of teaser stills, Peugeot has managed to whet our appetites for a new sport coupe to debut at the upcoming Paris Motor Show.

The concept has been mentioned before, but not substantiated or given anything visual to nail it down. Until now.

The Onyx concept, from the teasers given, appears to be a next-generation coupe styling of the 2010 Peugeot SR1 concept, this time with sharper angles and more aggressive lines. The sports concept here is probably going to become (eventually) the next Peugeot RCZ, though it could potentially be an all-new coupe as well.

No details have been given by the French automaker on the Onyx beyond teh short video clip, a few still photo teasers (see the attached gallery) and a promise to showcase the car at the end of the month when the 2012 Paris show begins.

What we can see is a highly stylized 2-door in the Peugeot signature sport coupe flow, with a strong, wide front end set off by scalloped LED headlights and slashing markers on the lower front dam. The intake is low and wide, emphasizing the wide stance of the Onyx.

Down the side, we see clean lines and a low profile emphasizing the powerful Ferrari-like stance of the new Peugeot. The wide fenders bulging to accommodate high-rimmed, fat racing tires suggest a rear-wheel-drive machine and the wide, flat rear hints that it could have a mid- or rear-mounted engine. Gil slits just visible on top of the deck substantiate this speculation.

The wide, flat rear is accentuated by the auto-adjusting spoiler and the boomerang-shaped taillamp slashes (also LED by the looks of them). Two huge rectangular ports below promise a powerful exhaust rumble to go with this sleek and mean sports concept.

Definitely another great debut to watch for at the 2012 Paris Motor Show. The Onyx is scheduled to unveil on September 29.