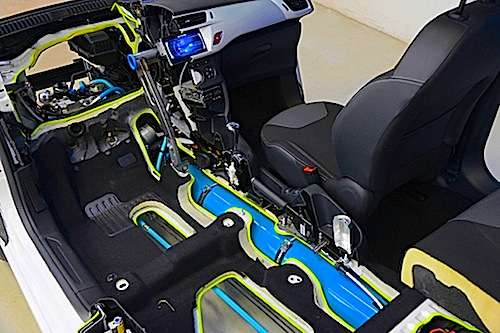 In the world of hybrids, the available technology uses a gasoline engine with an electric motor. Peugeot is looking to venture beyond this with air and hydraulics.
Advertisement

When it comes to hybrids, the choice is clear. A gasoline engine tuned to an Atkinson cycle for better fuel efficiency, coupled to an electric motor using with lithium or nickel-metal hydrate batteries is the norm. While we can opt from mild systems, such as the Prius to more sophisticated systems, as in the Fisker Karma plug-in hybrid, all of these cars rely on some sort of gasoline engine.

Talk About Pressure. Occasionally, our inboxes gets inundated with emails asking to review products, or how a local inventor patented hydraulic systems designed to be used in cars. The problems and benefits with hydraulics are clear, they are heavy but can offer much energy. The trick is to find the right balance between energy consumed and released, while keeping its weight in check. The same applies with air motors. MDI has been designing air engines and in 2007 I visited their headquarters in the south of France where I test drove their prototypes. Since then, the Guy Negre team has been working with Tata and some of his air-powered cars have found usage in airports.

Air & Liquid Hybrids. Another system we rarely hear about, short of future promised performance is the use of air and/or hydraulics within a hybrid platform. Peugeot has stepped forward with an interesting system they hope to have available by 2016. The system uses air and hydraulics with a hybrid platform to extend the range of small cars.

Technically Speaking. The system is a little complicated but uses compressed air to maintain the hydraulic pressure in an accumulator. In a nutshell, the hybrid uses a hydraulic pump and motor that recoups lost energy from braking or decelerating, as well as from the engine directly, which is stored in a compressed air tank. Since it is inefficient at highway speeds, the hybrid switches to its internal combustion engine but for city driving, the Peugeot group says it becomes a game changer. See the company’s video for more visual explanation.

For more information on the Peugeot group, see the PSA Peugeot Citroen’s website.

Pros And Cons. Anyone familiar with air or hydraulic systems will quickly point out the Achille’s Heel, current compression technology hasn’t evolved much since its creation. It isn’t inefficient, usually relying on pistons compressing gases with terrible energy loss. While Michelin has worked on interesting ways using a variable type of propeller-like system, compressors have a long way to go. Could this story be due to the current PSA group problems? Most likely, but at least they are thinking outside the box and innovating.

Will we see air and hydraulic hybrids here in the US? Doubtful, but if this technology proves successful, Peugeot might have bragging rights with its air and liquid hybrid system.