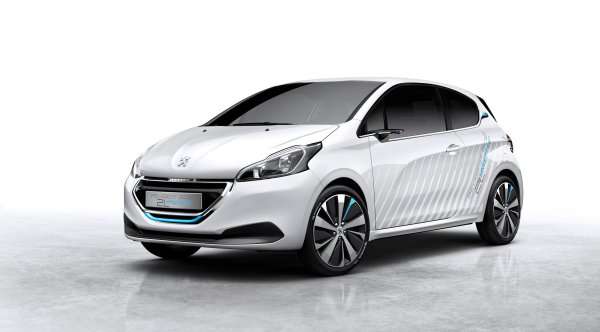 The idea of driving a car on compressed air is not new, but is often scoffed at. Peugeot thinks they've figured it out and have a 141 mpg demonstration car to prove it.
Advertisement

Vehicles that run on compressed air have been around for a few years. Every so often, an inventor or small automotive builder comes up with a way to make another car that is powered by it. The problems with compressed air power are many and the solutions are also plentiful, but so far, not realistic. That might have changed with the new Peugeot 208 HYbrid Air 2L Demonstrator.

Set to debut at the Paris Motor Show next month, the 208 HYbrid is what its name implies: a hybrid compressed air vehicle. According to Peugeot, this unique solution provides a small car capable of an impressive 141 miles per gallon and CO2 emissions of just 111.2 grams per kilometer.

Before you scoff at the idea, it's not as hokey as it might seem. This is not some cardboard laughbox from India.

Peugeot began by doing some extreme lightweighting for the car. Because of the inherent properties of the new hybrid powertrain they'd designed, several things that make a standard gasoline-electric hybrid heavy were not necessary. Batteries weren't needed, the exhaust system could be lighter weight, the fuel tank smaller, and new materials often used only in luxury cars were used to cut pounds everywhere possible - mostly with carbon composites.

From there, the new powertrain was perfected. It consists of four basic parts: a compressed-air tank at the rear of the car, a low-pressure tank just ahead of that near the rear axle (an expansion chamber), a hydraulic system (motor, pump) connected to the engine via an epicyclic transmission, and a small 1.2-liter gasoline engine.

The system works similarly to hybrid-electric cars with the engine being capable of powering the car alone, the compressed air stored in the tank being able to power the car alone, or both working in tandem. A sort of regenerative braking is used to reverse the motor and send compression into the storage tank while the tank can also be recharged by the engine as the vehicle moves. It takes only ten seconds for the air tanks to be full.

The three driving modes are optimized for fuel efficiency. In Air mode, the car travels at low speeds using only compressed air for short distances. In Petrol mode, the car uses only the engine, whose three cylinders can optimize for highway speeds and long-distance driving. The Combined mode is best for stop-and-go city and suburban environments where the low-end torque and mid-speed power of the air and engine are best utilized in tandem.

It's an intelligent system that does away with most of the complexity of a gasoline-electric hybrid while retaining many of the benefits. When the vehicle debuts at the Paris show next month, we'll know more about its operation and capabilities.