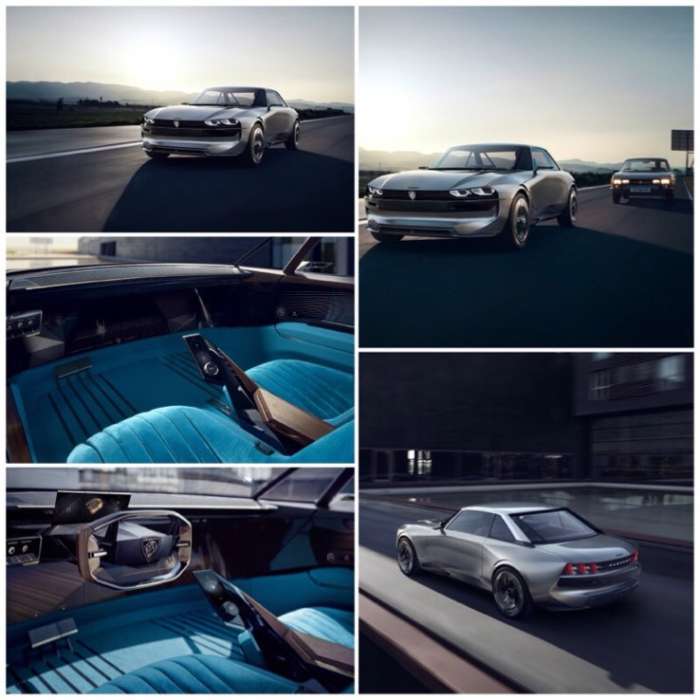 In a segment that was once considered exclusive to Americans only, that no foreign pedigree need apply, the French automaker in a bold and daring attempt to go where no foreign car maker has gone before, produces a concept in electric form with a warning to Ford and Chevrolet, that there’s a weakness with their own muscle pony cars, and Peugeot is ready to take advantage it, in the electric car market.
Advertisement

You can tell as a global car that the Ford Mustang has made inroads in Europe, and the Europeans like what Ford has given them. This is Peugeot’s answer to that. Peugeot unveils a muscle pony electric car one month ahead of the Paris Auto Show. The e-LEGEND concept’s silhouette is unmistakably American muscle with some harkening to the 504 to maintain its French royal pedigree, a reminder that some American peerage and pedigree is of European immigrants and ancestry. There is no doubt that this car is aiming right at the Chevy Camaro and Ford Mustang for both shamefully quite frankly, not having a full electric variant that neither has any foreseeable plans to make. Peugeot seems willing to fill in that gap, even autonomously. Regardless, keeping in mind the French are still our allies, America’s first in fact, and that this is only a concept to get juices flowing, and to avoid an arm race in the horsepower world, they demur specs for the cause of detenté.

This car looks like a French cosmopolitan who’s been spending some serious time in a Venice gym; California American, not Italian. With a rear that’s muscularly and angularly gaited wide as if it’s been doing squats, with a short rear deck as of its been doing deadlifts, and a long hooded bonnet as if it’s all natural, not on steroids (wink), and with tight angular lines, apparently all are designed to accommodate horse power and handling in an American style two door coupe configuration. The only other international flavor I might be possibly tasting from this car is possibly a bit of 1970’s Toyota Celica, another coupe that tried in a small way to complement the Mustangs at the time without the V8 power. The tail light array reminds me of a cross breeding between Celica and Mustang. But for this, one would almost swear this car was imported from Detroit, via LeMans, or Monte Carlo. Víva la Fránce!

That’s the outside of the car. If you don’t see how this car is American inspired, then you need to take a look at the inside to dispel your denial. One of the first things you’ll notice to laugh is how with the Italians, only the French, the emperors of fashion design, can take such a gawdy fabric as early 1970’s velvet for the seats, and style them in such a way that strangely makes them tastefully done. It’s almost as if they’re making fun of us to flip velvet around to tell us in that endearing French accent, “See? This is how velvet should be done!”

The other thing that grabs your attention inside, if you know anything about American pony cars, is how the curved and angled downward and forward dash looks like it was inspired from the 1960’s Camaros, including the gigantic dual screened instrument pods in front of the driver that reads onboard info like speed, fuel, voltmeter, tachometer, and oil. The steering wheel autonomously retracts, and when it does it emboldenly becomes a completely different dashboard to remind the occupants that unlike American muscle pony, this Euro pony can exert power without coaxing or assistance from the driver.

Jean-Philippe Imparato, CEO of Peugeot, said about the car:
“Peugeot e-LEGEND concept is not just a technological manifesto. This is the vision of a brand, PEUGEOT, actively focused on an optimistic and ultra-desirable future. For Peugeot, autonomous and electric are synonymous with even stronger sensations. Boredom will never be part of our DNA.”

Put Your Money Where Your Specs and Mouth Is! Nah!

Since the Mercedes EQC 200 mile range disaster earlier this month at its launch, and the assault by the automotive press as a result of it, including by this reporter, understandably the European car maker community has been coy, to put it politely, in revealing electric range in some cases horsepower specs.

What Peugeot did was frankly skirt around the issue by addressing it by way of how they’d like their muscle car to supercharge: to “add 500 km of range in 25 minutes.”

e-LEGEND debuts about a month from now at the Paris Auto Show. No plans for production, no comment from Ford or Chevrolet.

What do you think of this Peugeot Le Camáro Mustángue? Let us know below!!