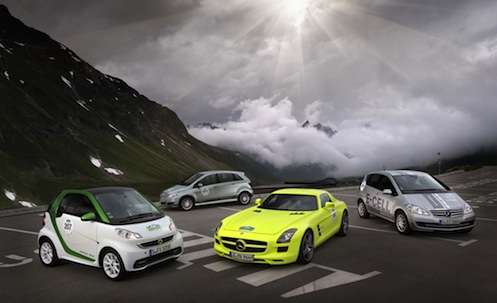 The SLS AMG E-CELL along with six other Mercedes-Benz battery and fuel cell-powered electric cars took part in the Silvretta E-Car Rallye this weekend. But the supercar from Mercedes is different.
Advertisement

Mercedes-Benz is taking the SLS AMG E-CELL elecrtric super-sports car along with the largest contingent of vehicles they have ever had to the third Silvretta E-Car Rallye. The German automaker will take a total of seven battery and fuel cell-powered electric cars to the event this year. The challenging rallye takes place in Montafon, Australia July 5-7, 2012.

For the first time, Mercedes will include two brand-new smart fortwo electric drive cars. They will be competing alongside two Mercedes-Benz A-Class E-CELL vehicles, two Mercedes-Benz B-Class F-CELL vehicles and the Mercedes-Benz SLS AMG E-CELL. The electric super-sports car is scheduled to make its launch sometime in 2013. It will be driven by Karl Wendlinger, an AMG brand ambassador and former Formula One driver.

The Silvretta E-Car Rallye is not your typical race

The three-day rallye is different from most races. First, it takes place not on a track, but through the mountains of Austria’s Vorarlberg and Tyrol regions. And the winner is not the fastest car, but the victor will be the driver “displaying the greatest degree of uniformity and skill” as they navigate the course. The cars will cover an overall distance of more than 330 kilometers (205 miles), around 30 kilometers longer than last year, and they have made the sections more demanding than ever before.

The drivers will take their electric cars and negotiate the sections of the course that will include steep grades of up to 15.2 percent and height differentials of as much as 4759 meters during a day. And what makes the rallye even more difficult, teams are expected to complete a series of trials in exactly the right time, to within a hundredth of a second. And if not, they receive penalties for faster or slower times.

Last year the rallye was won by an Audi A1 e-tron driven by Franciscus van Meel. van Meel said following the race, “sending an electric car into the Alps is one of the toughest challenges you can present it with. The fact that the A1 e-tron proved so impressive here is especially gratifying to me and it proves we're on the right track with our electric mobility approach of combining an electric motor with a combustion engine.” Audi also won the rallye in 2010 with their R8 e-tron.

The SLS AMG E-CELL is a true supercar

Karl Wendlinger will attempt to win an even more challenging course this year in the Mercedes-Benz SLS AMG E-CELL. He will take the performance sports car on the Alpine rallye course and see if the powerful electric supercar can be driven with precision. The SLS AMG E-CELL with the gullwing design and electric powerplant produces a massive 526 horsepower and 649 lb. ft. of torque. The supercar from Mercedes proves that electric cars don’t have to be boring.

Karl Wendlinger who is behind the wheel of the Mercedes-Benz SLS AMG E-CELL is no stranger to the mountainous roads traversed by the Silvretta E-Car Rallye. The former Formula One driver is a native of Austria. Results from the rallye aren’t in yet, but it will be interesting to see if Mercedes can win the event that Audi has dominated the last two years. Look for the SLS AMG E-CELL to launch next year.