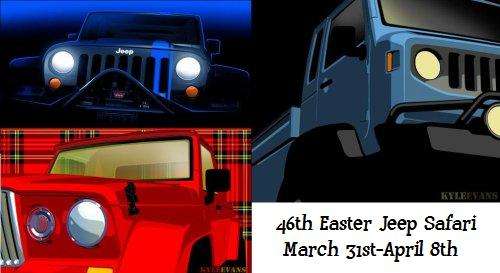 Each year, the Chrysler Group sponsors the Easter Jeep Safari in Moab, Utah with a handful of super-customized vehicles designed to titillate the off-roading crowd and just a few weeks ahead of the 2012 Easter Jeep Safari, the Trail Rated automaker has issued three colorful teaser images of three of those Moab-bound concepts.
Advertisement

The Chrysler Group has issued three very colorful pieces of artwork teasing the Jeep concepts coming to the 2012 Easter Jeep Safari in Moab, Utah but other than the new and the artwork; no information has been offered. However, based on the names and what little we can see, there are some guesses that we can take at what to expect when the Jeep group hits Moab in late March.

The first teased concept headed to the 46th annual Easter Jeep Safari is the Jeep Wrangler Apache (top left, black and blue) which looks to be wearing a serious off-road front bumper with a Warn winch, a set of huge wheel flares and a “drivers stripe” staggered towards the driver’s side of the body sporting the same basic design as the stripe found on the incredible Dodge Viper SRT10 ACR. Based on this one image, this looks like it could be a production level Wrangler fitted with some goodies to make for an even more capable vehicle with a wider stance, tougher exterior and a winch for pulling out stuck Hummers.

The second teaser – and perhaps the most curious – is the image on the right sporting what looks to be the basic grille of the Wrangler or Jeep Patriot named the Jeep Mighty FC. The name Mighty FC likely calls to the Jeep Forward Control pickups of the 1950s and 1960s with the cab located over the engine rather than behind it. From this image, it looks as though there is virtually no hood area and the cabin is sitting directly over the front wheels so it looks like the Mighty FC will have the engine mounted almost fully in the engine bay (similar to a Class C motor home), but with what looks to be slightly more hood area than the original 1950s FC, the Mighty FC concept may offer less intrusion from the engine into the legroom of the driver and passenger.

The third teaser – and the one that looks the coolest to me – is the image in red dubbed the Jeep J12. All we can see is the headlight and grille design from the 1960s Jeep Gladiator along with a very upright cabin, wide flares and what looks to possibly be a pickup bed. For those unfamiliar with the Jeep Gladiator, it was a pickup truck based on the Wagoneer in the 1960s and 1970s but the key difference is that the J12 has a much narrower hood area than the original Gladiator with wider wheel flares. Based on this, I would guess that it is based on a modern Wrangler chassis with a pickup bed and a unique front end dressing.

You can check out larger versions of the three pictures shown on the right of the new Jeep concepts headed to Moab for the Easter Jeep Safari. In past years, Jeep has typically shown more than three vehicles so when the big event starts later this month in Utah, we expect that there could be a couple more unique concepts in addition to full details on the vehicles mentioned above. Even though this is a Jeep-sponsored event, we would also be pretty shocked if the folks at Mopar don’t offer up a modified Ram pickup for the off-roading crowd as well.