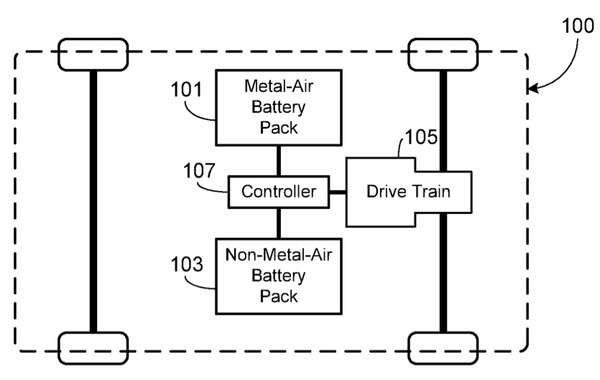 Today the price for Tesla Motors (TSLA) stock popped a little, up about 1% on the day, with the stock market press claiming the price move came on news about a battery pack patent the company was awarded in July. That patent, which covers one possible method to incorporate metal-air batteries into an electric car, and thereby increasing the energy capacity and driving range of the car, would not have any influence on Tesla's product line for a few years, because automotive grade metal-air batteries are several years in the future.

The patent, Electric Vehicle Extended Range Hybrid Battery Pack System (US 20130181511 A1), covers a battery pack design to combine lithium-ion battery cells, and metal-air battery cells. This use of two battery packs would extend driving range of an electric car. It uses a primary battery pack, and a secondary battery pack, with the secondary pack being of a type (metal-air) with a high energy density but cannot be the primary pack.

So far research into advanced battery chemistries show that metal-air batteries (such as zinc-air, aluminum-air, magnesium-air, iron-air, lithium-air or vanadium-air) have a much higher energy density than lithium-ion batteries. That's because the air forms part of the battery chemistry, but comes from the atmosphere rather than being packaged as part of the battery. The high energy density makes metal-air batteries attractive to electric cars, because the large quantity of energy would mean a long driving range.

Unfortunately metal-air batteries have some drawbacks, the most significant of which is a low discharge and charge rate. Metal-air batteries don't support the high power rate required to power a car to the performance level for which Tesla Motors is famous. No instant high torque and blazing speed would be out of character for Tesla Motors, eh? Additionally, Tesla's engineers feel the number of charge/discharge cycles for metal-air batteries must be limited.

Sitting between the two packs is a controller module to coordinate connections between the two packs depending on the state-of-charge in both packs and the current demand on the vehicle. The controller module ensures the charge/discharge of the metal-air battery is within the necessary bounds, while using the primary lithium-ion battery pack for primary driving duties.