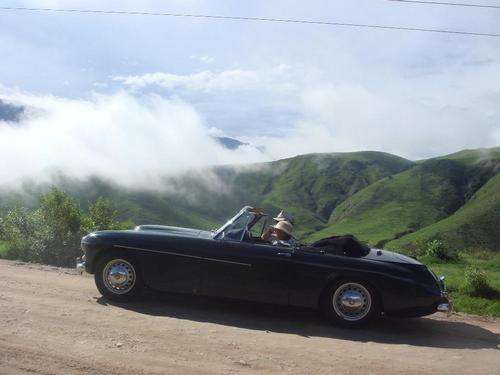 Do you think taking a roadtrip is a great way to see the world? Geoffery Herdman and his wife Hilary, certainly agree! The British couple just completed an “Around-the-World” roadtrip racking up over 33,000 miles.
Advertisement

During the incredible roadtrip, the Herdman’s traveled on awful roads, many of which with no tarmac, climbing to 10,000 feet on several occasions and yet only had $125 spent on repairs! The trip, which Geoffrey describes as a 'wrinkly gap year' took 16 months.

They also did the roadtrip in a bit of an old car, a 1956 Bristol. Only 42 of these cars were made, probably making spare parts hard to come by.

As Geoffrey proudly states “the evidence speaks for itself - the Bristol 405 Drophead is the ideal touring car”. I guess it is if the Herdman's drove it around-the-world!

The Herdman's incredible roadtrip involved driving up the east coast of North America to Halifax before crossing Canada and then heading south down the west coast. After a couple of months in South America, they headed to Australia before the car was shipped back via Turkey for the drive home.

"Central America was perhaps the most exciting part of the trip. There were no signposts or GPS coverage. The first night in Guatemala, having taken three hours to cross the frontier, we climbed for an hour in first gear on precipitous narrow roads. Long after dark we gave up trying to reach Lake Atitlan and stayed in a roadside hotel at 8,000 feet, it was bitterly cold and we were clearly the first guests to stay in a very long time." said Geoffrey Herdman. He continued “We lost count of how many times we were stopped by the police in Spanish America, but the record was five times in three hours driving through Honduras”.

To celebrate this achievement, the Royal Automobile Club is to put their Bristol 405, registration 10 DPG, on display in the rotunda of its Pall Mall clubhouse from 3 January 2012.

Ben Cussons, Chairman of the Royal Automobile Club Motoring Committee, says: "We are always pleased to recognize and celebrate the achievements of our club members and Geoffrey Herdman's is clearly one of the most remarkable."

Geoffrey Herdman and his wife are members of the Royal Automobile Club, as well as the Bristol Owners Club.

Throughout its 114-year history, the Royal Automobile Club has continuously supported and promoted the development of motoring. Most recently, 2010 saw the inaugural annual Future Car Challenge showcase the very latest low energy vehicles.