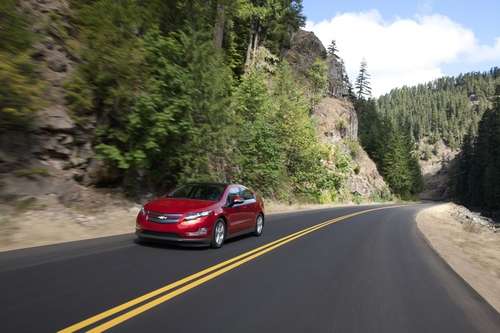 Chevy Volt turns one, what's next?

Recently the Chevy Volt, General Motor's (GM) venerable electric-hybrid car, turned one-year old. This marks an important occasion for GM that they have been able to sell and bring to market this electric-hybrid car. The real question for GM, what's next?
Advertisement

To date GM has fallen short of it's lofty sales target for the Volt. They expected to sell 10,000 Volts in a one-year period, but they have fallen short of that goal by about 40%. They have only sold around 6,000 Volts around the country. (Not surprising from a company that keeps making promises it cannot keep.)

For GM, the Volt is an important car that represents technological advancements and goals for the future. It also has helped keep up the company's image against rival automakers.

GM felt the impending power of the Toyota Prius and all the love, attention, and prestige Toyota got from building that hybrid. The Prius is undeniably the most recognized “green” vehicle on the road. Toyota now plans to turn Prius into a whole line-up of vehicles.

As well the pressure also came from Tesla, a silicon valley upstart that is building slick and fast electric cars. Tesla has changed the car industry for the better and forced GM to rethink how they think about building cars.

While GM's image has improved with the Volt, to a certain degree the company's image is still marred by the EV1 disaster. It is hard to forget how stupid a decision that was. As well as the imagery of the cars being crushed and EV1 drivers protesting GM taking the electric cars back.

GM now longer has to feel behind in the electric car market. (GM execs, should be on your hands and knees thanking Bob Lutz for that!) However, the Volt represents a big dilemma for GM.

While it makes good PR, will it make money? The answer is most likely “No”, even with the $7,500 a consumer can apply for when purchasing a Volt.

GM still owes huge debt to the government and Treasury. It has yet to payback large portions of the taxpayer backed loans, and GM's stock price is not going anywhere, anytime soon. Most likely meaning the government will not be able to divulge shares, unless they want to take substantial losses.

If the company wants to actually make money, they need to be focusing on cars people can buy and drive everyday. They have had good efforts, such as the new Chevy Sonic. However, having driven the Sonic against the competition, there is no way I would recommend buying one. Ask a majority of automotive media and they will tell you that the 2013 Chevy Malibu feels dated. This is a car that will not even be available to buy for awhile.

GM made the right decision building and selling the Volt. Dan Akerson, GM's CEO, hopes to get 60,000 Volts on the road. Of course this is just another empty promise from a company that needed my money and your money to stay afloat.

smitty wrote on December 23, 2011 - 4:13pm Permalink
Toyota "plans" to turn the Prius into a whole line of cars? Highlander hybrid (2006 intro) Camry (2009 intro). Where have you been? Other than being laughed at what did the volt do for Government motors? Add prestige? Give me a break. Try a bit of research before writing about things you know nothing about.
Adam Yamada-Hanff wrote on December 23, 2011 - 5:25pm Permalink
In the eyes of environmentalists (or ecomentalists as Jeremy Clarkson likes to say) and Hollywood elite, the Volt was a much needed car. GM's image is, and still is, tarnished by building large SUVs and gas-guzzlers that really are not in-style anymore. Many people still feel they should not have gotten a bailout from the Government. GM still needs to work on building reliable cars, as they are nowhere near as good as the Japanese. Also they still can't seem to get the formula right for building competitive small cars. At least that is my opinion. Toyota is coming out with several models with the Prius nameplate. Check Toyota's website! I guess you are just too busy making comments without doing your research though! :)
Leonard Mintz wrote on December 24, 2011 - 7:13am Permalink
As a 9 month Volt Owner with over 10,000 miles behind its wheel, let me tell you how great this car is. Fun to drive! Sports car performance! Corners like it's on rails! Great acceleration! Comfortable. And yes, expensive. But! And it's a big but: Based on my 17,000 miles a yeat, I was spending about $3,500 a year to gas up my forer ride. With the volt, I will spend about $1,100 between gas and juice. With the $7,500 tax credit bringing the cost, with sales tax and extended warranty, down to $42,000, with $2,300 in savings each year for 6 years, I will save $14,400 (2400 X 6). If It trades out for only $12,000, and it should beat that, my average annual cost will be $2,400 per year. And that is before Oil goes up from te current $99 plus. The media folks knocking this great car should try driving one for a few weeks! As production ramps up, as te cost of te battery slides down, the economies of scale will bring the price of Volt-like cars down. GM finally, after so many mis-steps, has a winner!
Liam wrote on December 24, 2011 - 2:08pm Permalink
Sounds great! Now let's check the math: While I understand you were spending $3500 a year on gas, a fair comparison would be against what a similar new car would cost in terms of gas. Driving 17,000 mile a year at 30 mpg with gas at $3.50 a gallon would make the gas cost $2,000 (I rounded up) a year. Unfortunately, this means your savings due to gas prices are $900 per year. Unfortunately, too is the $20,000 increased cost of the car. Using your numbers, this means the car is costing you $1600 more a year. Like most folks, once they do the real math, gas has to get somewhere north of $8.50 per gallon before the Volt makes sense. It makes people feel good about themselves, but does little for the environment or their pocketbooks.
Adam Yamada-Hanff wrote on December 27, 2011 - 11:46am Permalink
I am glad to hear that you have had good experiences with your Volt Leonard. I think the Volt is an impressive car, but I will NEVER buy a GM car! They have had too many missteps with building terrible vehicles over the years. Pontiac Aztek, Chevy Caliver, etc. Even the new Chevy Camaro has the worst steering wheel I have ever used. It is sort of mind-boggling to think GM engineers were stupid enough to miss that one! I am against bailouts and do not think GM should have gotten taxpayers money without stronger stipulations. They have yet to payback any money to the Government.
Ed Alexander wrote on December 28, 2011 - 8:59am Permalink
Try doing a bit of research before you write an article in the future... Don't overlook the role of the UAW in GM's financial issues (nor the link between the UAW and the Democrat party in the US)... GM is actually 2 years ahead of the rest of the world with respect to EV technology AND PRICE. Check out the proposed specs for both the Ford and Toyota EV entries for 2012. Not even close to the Volt (and cost as much). My feeling is that much of the reaction (like yours) to the Volt is very much in line with reaction to other new technologies (horseless carriage, electric lighting, computers, paved roads, etc)
Adam Yamada-Hanff wrote on December 28, 2011 - 9:09am Permalink
Ed, I am aware of the UAW's role in brining GM to its knees. There is quite an interesting and fascinating "This American Life" show about the UAW. If you have not heard it, I would recommend you go listen to it as well as all my readers. You can not include everything in every article that you write. They would be too long! :) I am actually a champion of EV technology. When people ask my opinion about electric cars I say, "Change or die!" Companies need to be putting R&D into EV, and if you aren't, you are going to be behind in 10 years. I am not a champion of GM building a whole lineup of terrible cars... still! Then throwing the Volt on a pedestal and claiming victory.