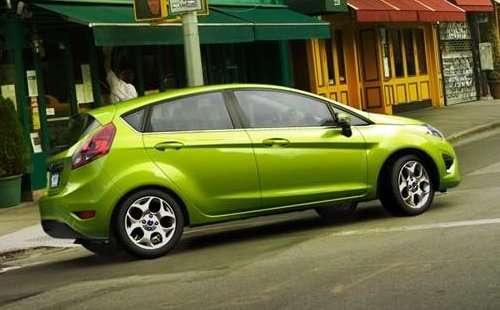 I recently had a chance to spend a week in a 2011 Ford Fiesta SES 5-door – a car that Ford has billed since before it hit the streets as being a “pretty big deal” – a promise on which the new Fiesta delivers very nicely.
Advertisement

The 2011 Ford Fiesta is the current entry-level model in the US and in past years, buying an entry level American car meant that you were getting a cheap means of transportation; devoid of any of life’s luxuries. While even the cheapest of today’s new cars feature items that base cars of the 1980s never dream of like CD players and air condition, the Fiesta goes well beyond the norm of today’s cost effective B-segment vehicles. While it should be pointed out that our 2011 Fiesta test car was an SES with the 301A Rapid Spec package (meaning that it was fully loaded), it still carries a price under $20,000 with a variety of features previously reserved for far more expensive models.

The outside of the 2011 Ford Fiesta SES 5-door is sleek, with a very European look. Up front, you have a set of massive chromed out headlamps that Ford calls “Dragon’s Eye Headlight” joined by a set of LED driving lights running along the front edge of the wheel opening. The front end features a large lower air intake opening between the driving lights and tucked between the large headlights as a far more subtle grille treatment. The overall design of the 2011 Fiesta nose gives the car a nice, sporty stance with a windshield line that offers plenty of visibility. Ford has also equipped the Fiesta with front and rear variable intermittent windshield wipers.

Along the side, the 2011 Fiesta has prominent wheel openings and a hard body line that allows the new Ford B-segment hatchback to stand out from the obnoxiously vanilla competition in the segment. The most interesting feature here is Ford Intelligent Access system that allows the driver to unlock the car simply by having the key fob on your person and pulling the driver’s side door handle. Many other companies offer remote or keyless entry but Ford is the first company to put this feature in such an affordable model. The side view mirrors include Ford’s handy blind spot mirrors on the outer edge to provide for better views around the vehicle and for those who live in colder climates, the Fiesta also includes power heated mirrors for easy de-icing in the winter. Power and heated mirror options in the least expensive model Ford sells where recent models may not have offered those features as an option. The side pillars are all small for improved visibility from every seating position and the black finish on the central pillars allow for a very clean – almost all glass look around the greenhouse of the Fiesta. Finally, the Fiesta SES includes a set of painted 16” aluminum wheels that add a touch of sportiness to the low-cost hatchback.

Out back, the 2011 Fiesta SES 5-door features high-mounted taillights that are large and hard to miss, flanking the roomy rear door opening. These taillights include the brake lights, turn signals and reverse indicators with a sharp, angular styling that furthers the efforts to avoid being another bland economy car. The rear door opens at the push of a button and when it does, there is lots of room for loading – even enough room to comfortably load in a large hockey bag.

Interior:
The inside of the 2011 Ford Fiesta SES 5-door offers just as many unique items to the B-segment as the outside, starting with the push button start ignition. Keyless ignition systems have become a mainstay in the exotic and luxury car segments but Ford brings it to the masses in the new Fiesta. Our Fiesta test car was not equipped with leather seats but it still came with heated front seats – another rarity among the B-segment. Ford designed the controls on the center stack to simulate the layout of a cell phone or personal entertainment device, with everything enclosed in one convenient area but thanks to the audio controls mounted on the leather wrapped steering wheel, you rarely have to take your hands off of the wheel to change the station, input or volume. This sound system, which in itself is impressive in such a cost effective model, features Ford’s Sync voice control and Sirius satellite radio in addition to CD and MP3 compatibility. All of the information on the stereo system is displayed on a bright orange screen located high on the dash for easy viewing when driving and the location of the radio and HVAC controls allows for easy access by the driver or passenger.

The 2011 Ford Fiesta SES 5-door is a compact hatchback but inside, there is a surprising amount of room – enough to comfortably seat four adults without cramping anyone. The seats are not incredibly intricate but they are comfortable with my only real complaint being the lack of a proper center armrest for the driver. There is, however, two cupholders in the center console that keep your drinks out of the way when shifting…which is a major complaint of mine with some other new models that put the drink holders in a position where large cups interfere with the shifter.

One feature that I particularly love in the 2011 Fiesta SES is the interior lighting feature. When you have your parking lights and/or headlights on, there are lights located in the footwells, along the dash face and in the cupholders that glow in your choice of seven programmable colors including red, blue, purple, orange, aqua, white or yellow-green. This is an option that I liked on the Lincoln MKS and on the low cost Fiesta, this is a very cool option that allows free, instant customization by the owner.

Click here for part two of our 2011 Ford Fiesta SES review where we examine the drive quality and performance of the new B-segment hatchback!

USA immigration... wrote on July 4, 2011 - 2:00am Permalink
I would love to try this new model! Sure looks very cute!
Jane wrote on July 8, 2011 - 6:07am Permalink
I love Ford Fiesta! <a href="http://www.indiandrives.com/ford-fiesta-2011-to-be-in-india-soon.html">Ford fiesta</a> always offers a great design and innovative features in their cars. I must say Ford fiesta is very affordable and performs well on Indian roads.