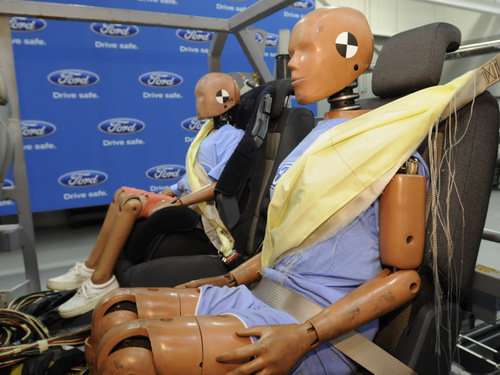 Ford's inflatable rear seatbelts, which first appeared on the 2011 Explorer, will be offered as optional equipment on the Flex and Lincoln vehicles in the summer of 2012.
Advertisement

Ford safety engineering vice president Sue Cischke said "This advanced restraint system is designed to reduce head, neck and chest injuries for rear seat passengers, often children and older passengers who can be more vulnerable to such injuries." "This is especially important to customers... who are looking for that extra peace of mind found in [such] technology."

The Ford Flex, which earned a Top Safety Pick rating from the Insurance Institute for Highway Safety recently, adds the inflatable rear seatbelts to its list of safety features that includes blind-spot monitoring, adaptive cruise control, rear-view camera forward collision warning, and rain-sensing wipers. "This is another unique family technology that builds on our safety leadership, including the most top US safety ratings of any automaker ever," Cischke said.

The Ford inflatable rear seatbelt system uses seat belts that look and feel like conventional seat belts, and according to reports from Ford, actually feel more comfortable as they feel padded and softer. In the event of a collision, the airbag folded up like an accordion inside the belt deploys and covers five times more area on the occupant's torso than a conventional belt, diffusing the energy more gently and reducing injury. The inflatable seatbelt uses cold compressed gas from a cylinder below the seat instead of an explosive reaction like the front airbags, so the belt will remain at ambient air temperature after deployment. Since there is no gap for the seatbelt airbag to close, the process can happen slower than a conventional airbag as well: approximately 40 milliseconds.

Ford's inflatable seatbelts are compatible with child safety seats, and because they feel more comfortable than conventional seatbelts, Ford says it could help increase rear seatbelt usage, which currently sits at 61%, closer to front seatbelt usage of 82%. "It's a very simple and logical system, but it required extensive trial and error and testing over several years to prove out the technology and ensure precise, reliable performance in a crash situation," said Srini Sundararajan, Ford safety technical leader.

Ford has not given details on how much the optional inflatable seatbelts will cost on the Flex or Lincoln vehicles, but maintains they will be available affordably as they are on the new Explorer, which are $195 according to Ford's consumer website.