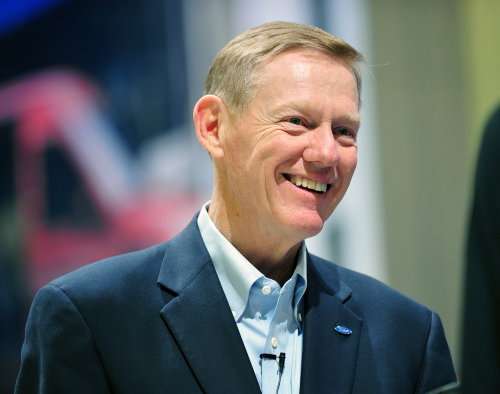 The 9th American Business Awards considered entries from over 2,800 companies around the country with more than 200 executives serving as the judging committee. There is a very long list of categories but Ford Motor Company took home a major award as President and CEO Alan Mulally was named the Executive of the Year for the manufacturing category. Mulally has helped Ford to climb out of the troubled spot of just a few years back and with the help of a strong vehicle lineup, Ford Motor Company has slowly gotten back to being a profitable company. Mulally beat out CEOs from Coloredge, First Solar, Kraft Foods and ZAGG to take the title of top exec from the manufacturing sector.

Tesla Motors of Palo Alto California was also a big winner at the 2011 American Business Awards, taking home three awards. First, Tesla took first place in Best Website for the Automotive & Transportation Equipment sector, which pits them against the other American companies offering automotive-related websites. Next, Tesla won the “Stevie” for Best Home Page, beating out Accenture, AT&T,
Callidus Software, Epic Media Group, LifeLock, Oneupweb, and Webs, Inc. Finally, Tesla Motors also took the top prize for Best Overall Website Design, beating out Accenture, BDA, BGT Partners, CaseStack, and Nutricap Labs. It should be noted that in winning the awards for Best Home Page and Best Overall Web Design, Tesla beat every applicable company in the US – not just those in the automotive sector.

In addition to Ford and Tesla taking home a handful of awards, a few lesser-known companies in the automotive sector got their hands on one of the coveted “Stevie” awards. Dealer.com, a company working with automotive dealerships to improve their web presence took home awards for Best Overall Company of the Year in the areas of Advertising, Business Services, Marketing & Public Relations as well as an award for Fastest-Growing Company of the Year. Finally, Chacon Autos, a group of automotive dealerships around the Dallas and San Antonio Texas areas, took home top honors for Best Overall Company of the Year.

Congrats to Ford Motor Company, Tesla Motors, Dealer.com and Chacon Autos for representing the auto industry and doing so well among 2,800 American companies at the 2011 American Business Awards!

Other Ford News:
Ford Ranger production to end on December 22, 2011
Ford to feature bolder fonts inside vehicles to help drivers of every age
Ford expanding inflatable rear seatbelt availability to Flex and Lincoln vehicles
The 2012 Ford Focus paces NASCAR’s Heluva Good 400
The Ford Mustang plant could be in trouble