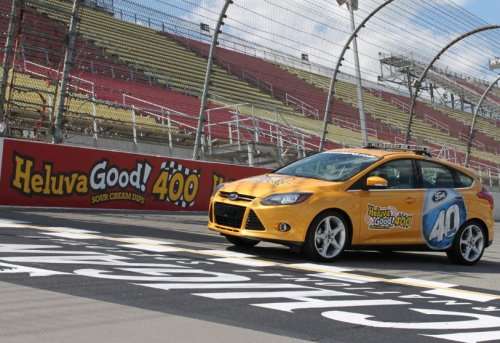 This past weekend, NASCAR’s Sprint Cup Series took to banks of Michigan International Speedway for the Heluva Good Sour Cream Dips 400 and when they did, the 2012 Ford Focus served as the official pace car with Ford’s Mark Fields at the helm as the celebrity pace car driver.
Advertisement

Clad in race type livery boasting of the 40mpg fuel economy rating, the 2012 Ford Focus 5-door lead the field of the Heluva Good 400 at Michigan International Speedway yesterday. It is not unusual for a new model to be featured as a pace car in all sorts of racing, with models like the Ford Mustang and Chevrolet Camaro offering limited pace car replica editions over the years to commemorate that vehicle leading the field. However, Ford went a very different route in showing off the fuel-friendly Focus in front of the power-hungry crowd but this was not the first time that Ford has offered a non-performance model as the pace car, with the Fusion Hybrid and new Ford Explorer having served similar duties in the past.

Ford pointed out that with the rating of 40mpg, the 2012 Ford Focus 5-door that served as the pace car this past weekend would be able to drive the Heluva Good 400 on less than a single tank of gas. While this might not be as exciting to some as say, the 2012 Shelby GT500 leading the field, Ford has made substantial strides in making their fuel efficient models stand out from the typically bland economy car crowd and the new Focus is a great example. The exterior is sporty and fairly aggressive for a family-friendly 5-door (everyone avoids the word “wagon” these days) and having had the pleasure of driving the new 2012 Focus, this is a car that could appeal to someone who wants a car that gets great mileage but is still fun to drive.

We might be seeing more of the Ford Focus as a pace car in the coming year as the Ford Focus ST is set to hit the US market soon – with a sport tuned suspension and high performance engine offering more punch than the standard, fuel friendly Focus.

Unfortunately, Ford couldn’t add to their excitement for the weekend with a win in the Heluva Good 400 as Toyota driver Denny Hamlin took the checkered flag followed by Ford driver Matt Kenseth. The good news is that with a 5th place finish on Sunday, Ford driver Carl Edwards maintained his place atop the season standings, as he currently holds onto a 20 point lead over Chevrolet driver Kevin Harvick.

As for the name of this weekend’s NASCAR race, Heluva Good is the maker of some tasty chip dips, and should you live in an area where Heluva Good products are sold, I strongly recommend the Bacon Horseradish dip. While it may have made for an odd name for a NASCAR race, the company delivers on their name and makes a Heluva Good dip.