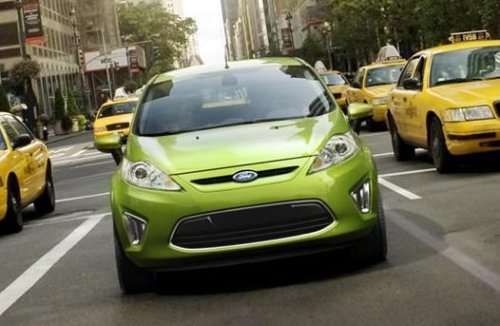 Along with packing the 2011 Ford Fiesta SES full of features that you wouldn’t expect from such a low-priced B-segment vehicle, Ford did a fine job of designing the suspension and drivetrain to depart from what many consumers would expect.
Advertisement

Around a decade ago, if you purchased the least expensive car available from any of the American automakers, it meant that you had a car that drove like it was one of the least expensive cars in the lineup. Suspension systems were crude and provided rough, uncomfortable rides and engines were weak yet still managed to get awful fuel mileage but with the 2011 Fiesta – Ford has put together an affordable compact that doesn’t punish the driver for being thrifty.

This is part two of our review of the 2011 Ford Fiesta SES - click here for part one if you missed it!

The 1.6L 4-cylinder in the 2011 Ford Fiesta lineup sends an impressive 120 horsepower and 112lb-ft of torque to the front wheels via either a 5-speed manual or the 6-speed PowerShift automatic transmission. Our test Fiesta was equipped with the new PowerShift, which uses dry clutch technology and neutral idle mode to increase fuel economy but more importantly – the PowerShift automatic helps to keep the engine RPM within the torque band for better acceleration. The 1.6L Duratec 4-cylinder likes its revs – making peak power around 6,200rpm but the 6-speed automatic transmission does a great job of bringing that power to the wheels in a hurry. Gone are the days of worrying if your compact hatchback has enough power to merge into highway traffic as the zippy little Fiesta climbs up to highway speeds in a hurry. You will know what I mean if you have ever pulled from the on ramp into the slow lane on the expressway only to have a semi bearing down on your fuel friendly compact but with the pedal jammed to the floor…there just is just not enough power to let you comfortably feel like that tractor trailer isn’t going to run you over. On the other hand, even with just 120 horsepower, the 2011 Fiesta confidently climbs from a simple highway entry speed (say 35-40mph) up to 70 quickly so there is no concern about traffic running you over as you merge. Overall, the PowerShift transmission might take some getting used to compared to a “traditional” automatic but the differences are only really noticeable when driving at very, very low speeds through a quiet neighborhood or something similar. Once you are out driving in even slower traffic there seems to be no clear downside to Ford’s PowerShift.

Detroit’s expressways can be punishing on a vehicle and thanks to MDOTs insufficiencies, roads like I696 can make for a great test track for a cars suspension system and ride quality. Ford has spent a tremendous amount of time on their recent models in cutting down on the amount of road noise that is transferred through the suspension and steering components into the cabin and that effort is noticeable in the 2011 Fiesta. While some of Detroit’s massive potholes are impossible to avoid and even harder to ignore, the Fiesta’s suspension does a nice job of cushioning the ride; making for a comfortable highway ride. Around town, I found that the suspension isn’t quite as forgiving as, say, the 2011 Lincoln MKS EcoBoost but for a car that costs under $20k – I was really impressed with how well the suspension handled the rougher roads around the Motor City. Also, while most B-segment buyers aren’t looking to do much road racing in their new car, the suspension setup in the Fiesta makes the compact hatchback pretty nimble and I would go so far as to say that it was fun to drive. Sure, some items like wider, low profile tires wrapped around larger rims would improve the handling capacities but that can also cause a decline in ride quality and honestly, I would expect that more Fiesta buyers are more concerned with ride quality than sporty handling. Even with that in mind, the 2011 Fiesta impresses as you cut through the turns on life’s roadways.

Luckily, thanks to Mother Nature’s vendetta against the Detroit area, I also had the chance to experience the 2011 Fiesta 5-door in a fairly nasty snow storm and it performed amazingly well. The Fiesta was able to navigate the local roads that were covered with several inches of slushy snow and on the highway, driving in packed snow the Fiesta was able to keep up with the 4WD traffic while many other front wheel drive cars stayed in the slower moving lanes as they struggled to get traction. Our test Fiesta was equipped with all-season tires so we speculate that with some aggressive snow tires, the Fiesta could make for a great winter driver for someone in an area that receives heavy snow.

Finally, we come to the numbers that many B-segment buyers do focus closely upon – fuel economy. As our 2011 Ford Fiesta SES 5-door was configured, the EPA rates it as yielding 29mpg around town, 38 on the highway and 33 combined. I found that under normal driving conditions during the course of one tank of gas, we averaged closer to the high end of the scale with an average of 36mpg. I didn’t have a chance to drive the car through an entire tank of gasoline on the highway to see just how good the mileage could be but I would bet that 40mpg is within reach; even without some of the ridiculous tactics of the hypermiling crew. Even on a tank of fuel where we were pushing the performance measures (and dealing with the freak snowstorm) the mileage was very good – staying about the 30mpg mark through every tank of fuel during our time in the sporty new hatchback.

Overall, Ford did a great job designing the 2011 Fiesta 5-door to offer a sporty, aggressive look that also yields great aerodynamics and with them, improved fuel economy capabilities. The days of driving an affordable, efficient car meaning that you have to drive a slow, crude vehicle or worse – an import – are gone as the new Ford Fiesta introduces performance measures, drivability and amenities that were once unheard of in a wallet friendly B-segment model. After spending 8 days putting the 2011 Ford Fiesta SES through the rigors of my daily grind I can fully see why Ford thinks that the new compact is a big deal – because it is. If you are in the market for a B-segment compact with great fuel economy, lots of gadgets, plenty of passenger room and cargo room, the Ford Fiesta should definitely be on your list of cars to drive.

Anonymous wrote on July 3, 2011 - 10:43am Permalink
way to go ford and without sticking it to the american &canadian tax payers