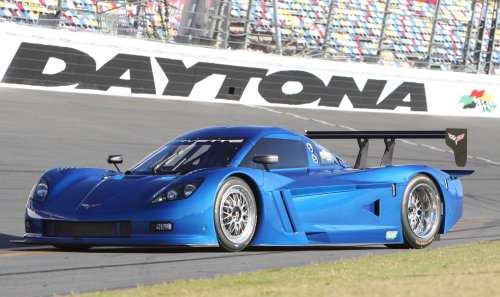 Today, General Motors took the wraps off of the Corvette that many believed offered some insight into the next generation of the American performance car but in reality this sleek new sports car is the 2012 Chevrolet Corvette Daytona Prototype – the vehicle that GM expects will help the company return to Grand Am racing greatness beginning with the Rolex 24 at Daytona International Speedway next January.
Advertisement

The General Motors and Chevrolet names have long been major players in the Grand Am world and the 2012 Chevrolet Corvette Daytona Prototype will arrive at the Daytona International Speedway on January 26th-29th for the 50th annual Grand Am Road Racing Series Rolex 24 at Daytona.

“Racing and performance are the founding principles of Chevrolet, and bringing the Corvette Daytona Prototype to GRAND-AM is a tremendous opportunity,” said Jim Campbell, Chevrolet vice president, Performance Vehicles and Motorsports. “The opportunity for innovation is what makes the Daytona Prototype Class such a good fit for Chevrolet. “Sports car and endurance racing is an outstanding platform for manufacturers like us to test and learn. The design of this race car incorporates iconic Corvette styling cues and will be immediately recognized by sports car enthusiasts and fans of GRAND-AM Road Racing,” Campbell said. “We are excited to see the Corvette DP compete in the legendary Rolex 24 at Daytona next January.”

As you can tell from the gallery on the right, the 2012 Chevrolet Corvette Daytona Prototype is a far cry from anything that we could be seeing cruising around public roads – at least not legally. The Daytona Prototype is much wider and lower than the standard production Corvette with a centrally mounted cockpit and a mid engine configuration being unlike anything that the Corvette lineup has ever seen in street use. Out back, the massive air intake begins in the roof and runs under the rear glass with that glass offering a modern take on the split-window look that was popularized by the 1963 Corvette. Oddly, the 2012 Corvette Daytona Prototype seems to be a culmination of all of the C7 Corvette rumors including the split window design, a midship engine placement and a revised look – but there is no real chance of this car ever being a production road model.

General Motors will have four teams with five cars competing in the 2012 Chevrolet Corvette Daytona Prototype for the 2012 season including the #90 Spirit of Daytona Racing team, the #10 SunTrust Racing team, the #99 GainsCo/Bob Stallings Racing team and the #5 and #9 cars from the Action Express Racing teams.

The last big 24 Hours of Daytona win came in 2001 when a Corvette driven by hall of fame racer Ron Fellows, Johnny O’Connell, Chris Kneifel and Franck Freon was the overall winner. That same year, late NASCAR great Dale Earnhardt Sr. piloted a Corvette to fourth place overall with the help of his son, Dale Jr., Andy Pilgrim and Kelly Collins.

Other GM News:
Chevy Reveals Full Details on Camaro ZL1 Including Price
The 2012 Chevrolet Camaro stakes its claim as the safest car in the US
Extensive Details Announced for 2013 Chevrolet Spark ahead of LA Auto Show
GM rolls out a life sized Camaro Hot Wheels model at the 2011 SEMA Show
GM introduces the Chevrolet Camaro COPO Concept ahead of SEMA