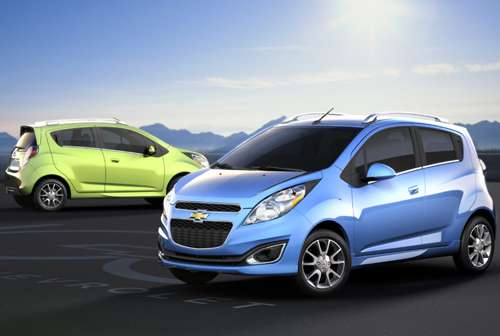 Chevy is packing a lot into its 2013 Chevrolet Spark that is being introduced this Wednesday, Nov. 16 at the Los Angeles Auto Show. This is not the electric version of the A segment minicar that is expected to arrive in 2013.
Advertisement

The 2013 Chevrolet Spark is a five-door hatch that populates the A-segment, the smallest class of passenger cars, yet it offers more passenger and cargo room than other mini cars such as the Fiat 500, Smartfortwo and the Scion iQ.

Powertrain
It's going to be equipped with a 1.2-liter, four-cylinder engine when its goes on sale in mid-2012. The Chevrolet Spark isn't being sold for its power because it doesn't have any at an estimated 85 horsepower and 81 lb. of torque. Unlike its main competition, the Spark runs on regular fuel. No fuel economy numbers have been released yet for the Spark, which weighs just over one ton at 2269 lbs. and rides on 15-inch alloy wheels.

Technology
It's neither transmissions nor powertrains that are going to sell this car to first-time buyers. Simply put it's going to be technology. The Chevrolet MyLink infotainment system, included on 1LT and 2LT Spark models, provides a seven-inch color touch screen. With MyLink, Spark buyers can bring their customized music libraries into the vehicle and use their smart phones and Bluetooth connectivity to access both Pandora and Stitcher internet radio and navigation. When the vehicle is stopped, owners can project video and even personal photo albums onto the screen.

Speaking of the Veloster, Chevrolet uses a similar design cue for the Spark. Designers disguised the rear doors by integrating the handles into the C-pillar area. Does it fool you? At first glance but there is still a discernible line for the door. Designers can't design that away.

Safety Features
What's most incredible about the 2013 Chevrolet Spark is the amount of safety features that are packed inside. It doesn't seem possible in such a small space (the wheelbase is only 93.5 inches) but the Spark has 10 standard air bags, including both driver and passenger front knee air bags to reduce the risk of lower extremity injuries in frontal crashes. Dual-stage frontal air bags, seat-mounted side air bags and side curtain air bags that extend over the front and rear seating rows are also standard. It also has stability control and ABS.

Other safety technologies include rollover sensing system; three-point safety belts in all four seating positions; seat belt pretensioners in the front driver and passenger seats; the LATCH child seat attachment system; releasable pedals; adjustable head restraints; and a collapsible steering column. Spark also is equipped with the OnStar safety and security system, which uses GPS and cellular phone technology to automatically call for help in the event of crash.

EV Version
An all-electric version of the Chevrolet Spark is also coming (one can just imagine the marketing evolving around that name). It's not expected to be on sale until 2013 as a 2014 model year vehicle.

Standard Items
Air conditioning and power windows are two standard details across the 2013 Chevrolet Spark lineup. Color-coordinated interiors feature a lower instrument panel – with a motorcycle-inspired gauge cluster – and lower center console for maximum visibility and storage. Heated leatherette seats and leather-wrapped steering wheel are included on Spark 2LT. (Is leatherette another word for pleather? Were any cows used in the production of leatherette?)

Anonymous wrote on November 15, 2011 - 8:41pm Permalink
This car will be priced below the Chevy Sonic and is actually a bit smaller. They consider it in its own class. I think this will more than likely compete with the Smart car, iQ and other mini cars out there. I really love the looks of it for being a small car, gone are the days of ugly looking boxes and fender covers on these class of cars. If you want to learn more about the car http://www.sparkownersforum.com has a nice following and even has European members who already drive this car. The US is just slow to the race on the Spark :)

LG's New EV Battery Plant Is a Welcome News for Tesla
Tesla Giga Berlin's New Hurdle: It's Not Only the Gov't, but Now Tesla Itself
END_OF_DOCUMENT_TOKEN_TO_BE_REPLACED