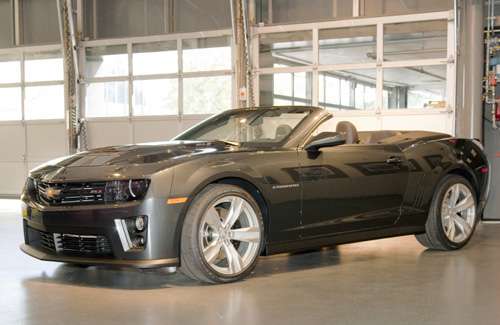 In the wake of Ford unveiling fairly complete info on the Shelby GT500 Mustang that pumps out 650 horsepower, Chevrolet is out with complete details on the 2012 Camaro ZL1, including price and horsepower.
Advertisement

The sticker price of the 2012 Chevrolet Camaro ZL1 is going to be $54,995, including performance traction management and magnetic ride suspension. Its horsepower and torque levels are 580 horsepower (432 kW) and 556 lb.-ft. of torque (754 Nm) respectively from the supercharged 6.2-liter engine. Most of the performance details were previously reported by TorqueNews Managing Editor Patrick Rall.

Chevrolet is using the Camaro ZL1 to position itself against much more expensive competition. It has issued a chart that shows the Camaro's bang for the buck:

Missing from the comparison is the 2013 Shelby GT500, which has no price info yet, but does produce 650 horsepower and 600 lb. ft. of torque, making it the most powerful production V8. Expect the Shelby GT500 to be in the same price range as this top-of-the-line Camaro.

Chevrolet is positioning itself as the better of the two cars when it comes to track readiness. It says the Camaro ZL1 has been engineered to be track-capable from the factory, including a rear-differential cooler, an integrated engine- and transmission-oil cooler, and brake-cooling ducts as standard equipment. Chevrolet points out the features not available standard on the 2013 Ford Shelby GT500:

“With 0 to 60 taking less than four seconds, and a top speed in excess of 180 mph, the power and acceleration of the Camaro ZL1 rivals many supercars,” said Al Oppenheiser, Camaro chief engineer. “And, horsepower is only half of the story, as the most significant measurement of the ZL1’s potential is lapping the Nurburgring in 7:41.27. That is a great testament to the power, braking, grip, and balance of the Camaro ZL1, and to the well-rounded performance of the ZL1 that sets the bar for the sports-car segment.”

The Camaro ZL1 comes standard with several track-capable technologies that are exclusive to the segment. For example, it is the first sports car to feature the third-generation of Magnetic Ride. This advanced suspension system employs valve-less damping and Magneto-Rheological (MR) fluid technology to vary the suspension firmness to match the road and driving conditions.

When the driver pushes the throttle to the floor, the system holds a predetermined engine speed until the driver releases the clutch. Then, the system modulates engine torque 1,000 times per second to maximize the available traction. Similarly, on a road course, the 2012 Camaro ZL1 driver can apply full throttle when exiting a corner and Performance Traction Management will automatically manage acceleration dynamics to maximize exit speed based on available traction.

Anonymous wrote on December 2, 2011 - 12:10pm Permalink
The Camaro sounds like a super car but if the Shelby gets any kind on launch control the Camaro is in serious trouble.