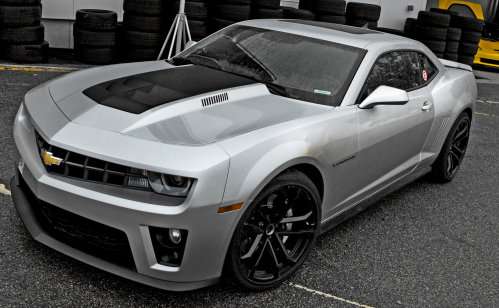 Full information on the 2012 Chevrolet Camaro ZL1 is here

The horsepower loving war is eagerly anticipating the full launch of the 2012 Chevrolet Camaro ZL1 but thanks to a dealership representative posting on the popular enthusiast’s site Camaro5.com, we have a look at pretty much everything that you could want to know about the new super muscle car.
Advertisement

First of all, Anna Bearington of Sparta Chevrolet in Sparta Michigan confirmed the features of the 2012 Chevrolet Camaro ZL1 that we were already aware of, like the fact that the new high performance muscle car will pack 580 horsepower (6,000rpm) and 556 lb-ft of torque (4,200rpm). This power is shuttled to the rear wheels via a standard 6-speed manual transmission, although a 6-speed automatic transmission with GM’s TAPshift steering wheel controls is available for those who don’t want to bang through their own gears. The drivetrain is completed by the same magnetic selective ride control system with launch control that helped the new Camaro ZL1 to roar around the famed Nürburgring in just 7 minutes and 41 seconds – making easily it fastest American muscle car to tour the German road course which is bolstered by the 51/49weight distribution ratio.

Now for some information that we didn’t know until today, starting with the dimensions of the 2012 Chevrolet Camaro ZL1. The ZL1 has a wheelbase of 112.3”, an overall length of 190.4”, a height of 54.2” and the front and rear tracks that are both 63.7”– all the same measurements as the 2011 Chevrolet Camaro SS. However, while the Camaro SS weighs “just” 3,860lbs, the supercharged ZL1 with the vastly upgraded suspension and braking system weighs in at a hefty 4,120lbs…but before you grumble at that number you should keep in mind that the ZL1 is still a fair deal faster than the Camaro SS.

Inside, the 2012 Chevy Camaro ZL1 features high performance seats clad in leather and microfiber suede with full power controls for the driver and passenger while more leather is found on the steering wheel and shift knob. Alloy pedal covers are standard as is the same 4-unit auxiliary gauge pack in the center console as the standard Camaro except the ZL1 will include a boost gauge. Options for the 2012 Chevrolet Camaro ZL1 include the colors, wheel and transmission options mentioned above but buyers will also be able to select a power sunroof, a stripe package, and exposed weave carbon fiber hood inserts in place of the standard black inserts.

Needless to say, a dealership worker dropping the details on the 2012 Chevrolet Camaro ZL1 was as appreciated by the folks at Camaro5.com as it is by the rest of the horsepower-loving world, with the thread running to ten pages as this article goes live. Head on over to Camaro5.com for a closer look at the discussion with members offering their every question on the Camaro ZL1 to this kind dealership person by clicking here.

Tsingshan's Threat to Tesla: EV Maker Is In Battery Crosshairs
Tesla-Funded Research Reveals One of The Biggest Mysteries of EV Battery
END_OF_DOCUMENT_TOKEN_TO_BE_REPLACED