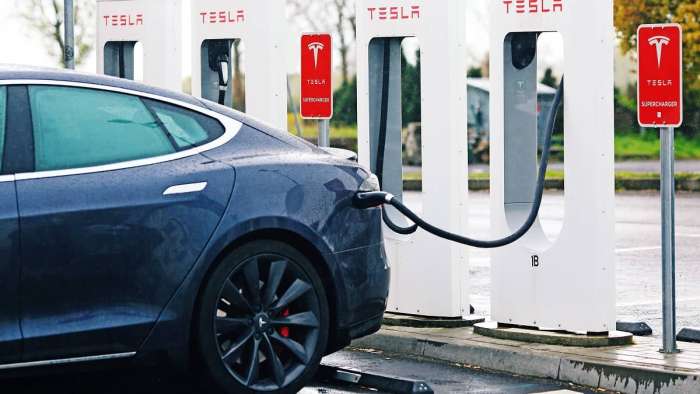 Tesla reportedly is outselling it’s three main competitors (Chevy, Nissan and BMW) combined. How much more would Tesla be able to sell if the competitors found ways to make their cars available to everyone? This report will explore some ways in which Tesla could increase its dominance in the EV market, and how it could emulate Ford’s approach to automobile manufacturing during the 1920s. H. Rosenmayer reports for Torque News.
Advertisement

In the 1920s Ford developed the idea to build automobiles that everyone could afford. Until that point, cars had been available only to the wealthy because of the high cost of building each unit one at a time. In 1913 Ford installed the first assembly line (the brainchild of Ransom Olds) in order to decrease cost by automating the manufacturing process. Seemingly overnight, this made the process quicker and cheaper. Ford knew that he could make more money if he made cars that everyone could afford. There were then and always will be more low and mid-range buyers than luxury buyers for whom all auto manufacturers build their cars.

Watch how can Tesla continue dominating the EV market at Torque News Youtube channel and subscribe for daily Tesla News.

This one adjustment opened an untapped market. Ford was able to make auto purchasing possible for almost everybody by building cars quickly, at lower cost, and more reliably than his competitors.

Also, Model Ts were able to do things no custom-built car could. Replacing broken parts was easy and inexpensive because they were all built with standardized parts, and improvements in design could be tooled into the manufacturing process quickly. Plus, they could go through 6 inches of thick mud along uneven ground and keep on chugging!

Tesla already has the market cornered on EVs. How much more market share could Tesla acquire if, in addition to its high mileage luxury cars, it gave the average car buyer, who may not be able to afford a Model S, a core group of lower mileage (therefore lower cost) vehicles from which to choose? The average driver really doesn’t need a daily range of 300-400 miles for their cars. Most people, in theory, could live 95% of their life with 150 miles of battery range or less. For the one or two weeks a year when people would need more range, to go on vacation, for instance, Tesla could offer a rental service to use one of their higher range cars, or the person could rent and drive one of the many hybrids or plug-ins that are available on the market.

Tesla could make models of cars with a lower range (i.e. lower cost) and undoubtedly have a greater market share than it does even now. Currently, they make cars with 450 miles of range, but if they were to make lower-cost cars with 150 miles of range, they would be able to earn more for those three cars combined than they would for the one car with 450 miles of range. Tesla could acquire three new customers instead of just one and the potential for multiple customers from the three could build up quickly. Just think, if Tesla introduced a Camry or RAV4 equivalent into the market that had 150 miles of range combined with the reliability of a Toyota they could take over even more car segments than they have mastery of now.

In addition, Tesla vehicles hold their value very well. Trying to find even a used one at an affordable price is well-nigh impossible. But what would happen if Tesla broke through the market, like Nissan did with the Leaf, and flooded the market with lower-priced, low mileage capability, low battery degradation, high-reliability RAV4-like Teslas? Since the Leaf was the first mass-market EV people flocked to buy it. With the added value of the Tesla name and improved overall quality, Tesla could storm the market and overtake any competitor.

Tesla could accomplish this by building price point competitors to the Hyundai Ioniq EV and Mini SE, both good sedan/ coupe cars with good reliability and a lower MSRP. In the American SUV market Tesla could potentially out-compete the RAV4 Prime or Hybrid, and the internationally available Kia Niro EV, and Hyundai Kona EV.

Tesla has proven their battery reliability over the past ten years and also has gotten their name out as the leader in the EV segment. Introduced in 2012 the Toyota RAV4 EV was a great combination of Toyota’s market-leading reliability and Tesla’s market-leading battery technology. The MSRP of the RAV4 EV was in the $50k range, but a lot has changed in the last 8 years. Tesla now has the capabilities to build fleets of cars, and have changed their battery technology enough that the batteries are rated for 300,000 miles or more which has been proven in several articles and studies, whereas some Nissan Leafs degrade so badly they can barely get 50 miles of range at 50,000 miles, from their original 73 miles or degradation of 32%. Nissan Leafs have no cooling pack, which leads to their quick degradation, whereas Tesla has a very specific fluid its batteries sit in that are able to transfer heat away from the batteries. In an article, published at Digital Trends Tesla found that running cars for over 300,000 miles only showed a 24% decrease in battery capacity dropping range from 260 to 200 miles.

In conclusion, many factors beyond the scope of this article must be considered for this sweeping change, but if Telsa could follow Henry Ford’s example, and build a lower range, high-reliability car, it could break even further into the EV market. They are the leader in battery development, have built a good name in reliability, and are, well, super cool!

This article is prepared by H. Rosenmayer.

Mark wrote on August 23, 2020 - 2:08pm Permalink
Tesla is constrained by production bottlenecks at the moment. China production is doing well and with apparently much higher quality than Fremont. Hopefully the Texas plant will see a jump in quality and production. Musk has also hinted at a lower cost small car but styling is huge issue of his micromanagement and he does not like the SUV look. IMO that is the greatest weakness of Tesla as so many consumers want the boxier SUV look with its attendant space advantages rather than the sedan or coupe style SUV that is a fashion. Range and reliability are already established. We now need to multiply models to appeal to more customers. We also have to remember that Tesla is very young and is frantically successful for its tender years.