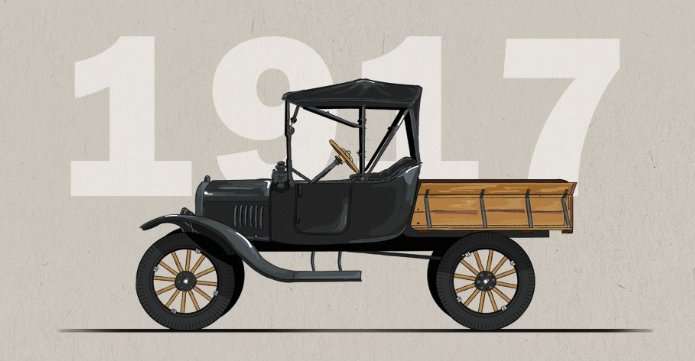 The first ever Ford Truck was introduced on July 27th, 1917, so the bestselling truck and bestselling vehicle overall in America officially turns 100 years old today – and it all; started with the Ford Model TT.
Advertisement

The Ford Model T was introduced in October of 1908 and when it hit the market, the $825 car was an instant success. Ford’s assembly line process allowed the company to make cars more quickly and more efficiently, so Henry Ford was able to charge far less than the competitors. As a result, the Model T was the car which led to the boom in the American auto industry, as it was the first which was affordable to the average American. Ford sold 10,666 Model Ts that first year, but as prices dropped over the following years, sales climbed over the half million mark in 1916, when the Model T cost just $390.

During those first 9 years of Model T sales, Ford had received a great many requests from prospective buyers for a Model T which could be used for heavier duty use. To answer those requests, Henry Ford introduced his Model T Truck (Model TT) on July 27th, 1917.

The First Ford Truck
The 1917 Ford Model TT shared the cab and engine of the Model T “car”, but the truck rode on a slightly longer wheelbase of 125 inches (the car was 100 inches). Like the Model T, the Ford Model T Truck offered 20 horsepower from a 177 cubic inch inline four cylinder engine, but unlike the car, which used a ring and pinion drive system, the truck used a worm gear drive system – affording that first Ford truck a top speed of 22 miles per hour when properly equipped.

However, while the 1917 Model TT was much slower than the car, it was far more capable, with the ability to half a full ton thanks to the beefier frame. This greater working ability was exactly what customers had been requesting, and with a price of $600, the truck was $100 more than the 1917 Model T car.

During that first year, Ford sold 209 copies of the Model T Truck. For comparison, Ford is averaging around 71,000 F Series pickups sold per month during 2017, which with 25 selling days and 12 hours per day, breaks down to about 236 Ford trucks sold every hour today. In other words, the F Series truck has grown to be so popular than during the first hour of business today, Ford sold more trucks than the company did during the first year of sales back in 1917.

Ford truck sales may have started slow in 1917, but by the end of the Model TT in 1928, the company had sold more than 1.3 million examples of their hardworking pickup, with sales peaking in 1925 when the company sold more than 300,000 trucks.

Heading Towards the F Series
Based on the success of the Model TT, Ford introduced the heavier duty Model AA in 1928, followed by the Model BB in 1933 and the Model 50 in 1935 – which ushered in the era of the Flathead Ford V8 engine. By 1941, Ford had sold more than 4,000,000 trucks, but the war effort forced them to stop consumer production to built military vehicles. As a result of building war machines, Ford learned how to make their trucks even tougher, so when they got back to building consumer grade vehicles in 1947, they were ready to offer the toughest trucks ever.

For 1948, those tough, new trucks were introduced – and they were called the Ford F Series. With the F Series having been introduced for 1948, the 2018 model year will mark the 70th anniversary of the F Series and in the 70th year, the F Series will almost surely be the bestselling truck in America for the 42nd straight year (2017 should be the 41st) while also likely being the bestselling vehicle in America for the 37th straight year…so for more than half of its existence, the Ford F Series has been the most popular vehicle and the most popular truck in America.

The trucks which we know today as the bestselling trucks in America all started with the 1917 Model TT back on July 27th, 1917 – so here’s to wishing the Ford Truck a very happy 100th birthday.