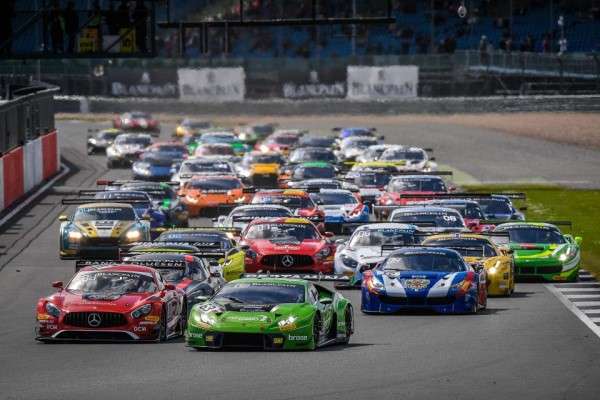 Lamborghini's Huracan GT3 is off to a fast start in the Blancpain Series. With three victories under its belt, the Volkswagen subsidiary is looking forward to the next event in a couple of weeks.
Advertisement

With three consecutive victories under its collective belt, Lamborghini continues to dominate the prestigious Blancpain GT Series. Lambo claimed its first victory at the end of last month when the Huracan GT3 it is campaigning won an endure at Monza. Early this month, the team raced to victory at the Brands Hatch Sprint Cup. Meantime, at Silverstone, the Grasser Racing Team brought Lambo its third victory of the season.

Drivers Mirko Bortolotti, Andrea Caldarelli and Christian Englehart, managed to hold off a hard-charging HTP Motorsport Mercedes-AMG GT as their Lambo crossed the finish line just three-tenths ahead of the Mercedes. The cars constantly fought to maintain a lead from the moment the green flag dropped to the checkered flag.

Starting from the first row, after having the second-best qualifying time out of 55 cars on the grid, Bortolotti overtook and passed the Akka ASP at the Copse. Bortolotti managed to stretch the lead of the Huracan to five seconds early on. However, he was frustrated by the safety car’s release from the track. Caldarelli slipped behind the wheel for a stint in the Huracan GT3. Caldarelli managed to hold onto the lead as the Lambo hit the pits for the last time and Engelhart took over the piloting chores.

Engelhart and the Huracan GT3 fought off charges by the AMG-GT teams of HTP Motorsport and Akka ASP. The HTP and Akka drivers saw lots of the Huracan’s tail spoiler as Englehart closed things out with an impressive display of racing skill, taking the well-deserved third victory of the season.

Indeed, at this point of the season, Grasser Racing and the factory drivers of Lamborghini Squadra Corse now lead the Blancpain GT Series championship standings.

Lamborghinis featured prominently in the final race standings. The Orange 1 Team Lazarus of Crestani, Yacaman and Pohler; and the Ombra Racing Team of Beretta, Gattuso, and Piccini finished 14th and 15th respectively. The second Huracan GT3 of the Grasser Team, with Giammaria, Siedler and Perez Companc behind the wheel, finished in 17th position, while Attempto Racing’s Lambo with Baguette, Mapelli, and Venturini, ended the race in 19th.

The next Blancpain GT Series events are Zolder on June 2-4 and Paul Ricard on June 23-24. The Paul Ricard event is a 1,000 km enduro. Also on June 23-24, the third round of the Lamborghini Super Trofeo Europe is slated to be run.

LG's New EV Battery Plant Is a Welcome News for Tesla
Tesla Giga Berlin's New Hurdle: It's Not Only the Gov't, but Now Tesla Itself
END_OF_DOCUMENT_TOKEN_TO_BE_REPLACED