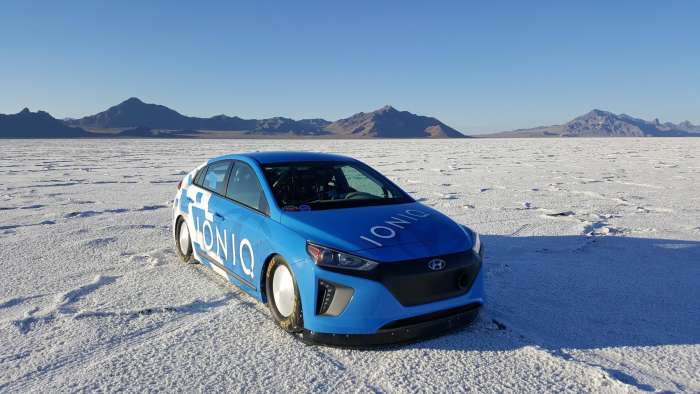 What began as a test of durability and dependability ended up a grassroots effort by Hyundai engineers to set a new hybrid land speed record at Bonneville -- they did.
Advertisement

A race-prepared Hyundai Ioniq hybrid prototype recently set a land speed record for a production-based hybrid. The Ioniq averaged 157.825 mph for its run while exiting at the peak speed of 160.7 mph at the Bonneville Salt Flats, Utah. The Ioniq is the automaker’s newest hybrid. There are three powertrains available, hybrid, plug-in hybrid and electric. The hybrid and electric models go on sale later this year.

“We couldn’t be more proud in setting the FIA hybrid-category record with our new Ioniq hybrid,” Mike O’Brien, vice president of corporate and product planning, Hyundai Motor America. “Our engineering team really push the limits to set this new segment benchmark while demonstrating the impressive durability of the entire Ioniq vehicle platform. We expect this will be the first of many accolades for Ioniq.

The rigorous testing program that the engineering team put the Ioniq through was the convincer. “A key role of Hyundai’s engineering team in the U.S. is to thoroughly test all future vehicle prototypes to ensure they exceed the demanding expectations of our customers,” Gradu said.

As you might expect, the development team did some serious modification work to the hybrid prototype so it could break the record. The tweaks included: