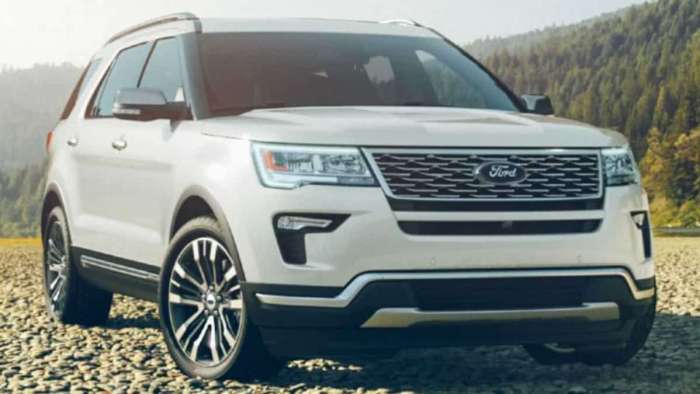 Ford continues with its policy of recalling vehicles to fix problems before any regulators can act. It is a responsible policy that should keep customers happy. This time the automaker has recalled about 660,000 Explorers to fix problem-troubled roof rails.
Advertisement

Ford has sold its vans and SUVs with roof rails for the longest time. Indeed, when I drove my Ford Windstar van some 20 years ago, I liked the fact that the automaker had installed them.

I never asked for them. The roof rails came as part of the deal. It made carrying and tying down things like outboard roof cargo storage pods relatively easy. Even in 2000, we used a lockable pod to keep our valuable items out of sight. However, for someone to get the items that we stored up there on the roof during our vacations would have been nearly impossible as they didn't have our keys. And, to try to get the pod off the van would have equally impossible.

Meantime, the ongoing Takata safety recall, the largest in history, has continued to plague automakers like Ford. Recently Ford recalled 2.6 million vehicles as part of the Takata recall.

That aside, the roof rails came in handy when we wanted to move things like mattresses when we moved. And, when the holidays came around, it made it easy to lug things like trees and other things – gifts, bikes, rockers, and all the rest – from either our relatives or to our home. The rails on the Windstar were quite convenient.

As you can see, this situation would leave the drivers following the Explorer with potentially lots of front-seat damage. Even worse, if the roof rail cover smashes through the windshield, it could injure the drivers and/or passengers of trailing vehicles.

The affected Explorer models include base and XLT trim levels, Police Interceptor, and Explorer Sport models. The roof rail covers are silver or black. The recall affects 620,483 models in the U.S. and its territories, 36,419 in Canada, and 4,260 in Mexico.

Ford says that it has not heard of any crashes or injuries caused by this problem.

Ford will begin contacting customers late next month. Dealers will inspect the roof rails and secure them with plastic push pins. Dealers will also replace any damaged rail clips, and roof fail covers as necessary, free of charge.