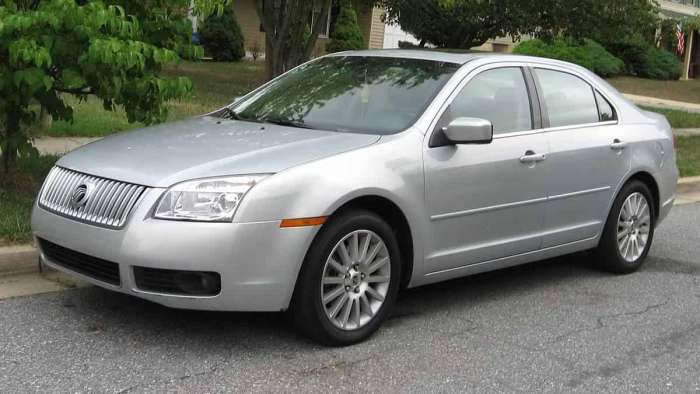 Ford Recalls 600,000 Vehicles To Keep Brakes From Failing Due To Sticking Valve

Ford has recalled 600,000 2006-2010 Fusion, Mercury Milan, and Lincoln MKZ midsized cars to fix a ABS problem. The ABS valve reacts with the brake fluid currently used in the vehicles and can significantly slow or stop the action of the ABS valve, leading to braking problems. So far, two injuries have been linked to the issue.
Advertisement

In two recalls, Ford has recalled more than 600,000 vehicles for critical brake and spare tire problems. The brake issue affects 2006-10 Ford Fusion, Mercury Milan, and Lincoln MKZ, while a limited number of 2020 Ford F-150s has an issue with the spare tire.

In the first recall, the anti-lock braking valve (ABS) may remain open following an ABS event such as an emergency or hard stop that causes the ABS to engage. If the normally closed valve does remain open, the brakes will require more travel to stop the vehicle. The recall affects 600,166 vehicles.

The reason for the added travel is that the ABS valve reacts to the brake fluid, which contains corrosion preventive additives. The reaction between the valve and the fluid causes the valve to remain open, increasing the risk crashes, said the National Highway Traffic Safety Administration (NHTSA).

In its announcement, Ford said that it is aware of 15 accidents and two injuries that may be related to this problem. The automaker built the affected vehicles at its Hermosillo, Mexico Assembly Plant from Feb. 22, 2006, to July 15, 2009.

Dealers Will Replace The Faulty Units

Ford dealers will inspect the hydraulic control unit for signs of stuck or slow-responding valves and replace the unit, if necessary. The hydraulic control system will be pressure-flushed with DOT 4 brake fluid. And, the DOT 3 cap currently there will be replaced with a DOT 4 cap. The Ford internal reference number for this recall is 19S54. The NHTSA identifier is 19V904. Ford will notify owners initially of the recall in mid-January. There will be another notice sent out when parts are available, which is expected late in the first quarter of 2020, according to NHTSA. For the hearing-impaired, the TTY line is 800-424-9153. You can also contact the agency through its website, www.safercar.gov.

In the second recall, Ford has recalled a small number of 2020 Ford F-150 pickups to replace the spare tire. According to Ford, the bead area could have been damaged when the spare was mounted. Over time, cuts, tears, or other damage may lead to corrosion to the bead-wire. Bead-wire corrosion can cause separation of the bead wire, resulting in a rapid loss of air pressure, which leads to the tread detaching from the tire. The bead is the point where the tire’s sidewall joins the tread.

Ford has issued several other recalls recently, the most recent of which is for a fire threat from sparks from pretensioners that can ignite the carpet causing a fire. In another recall for Ford Super Duty pickups for unintended tailgate openings due to problems with water in locking mechanism. In another recall, 78,000 Ford Rangers were recalled for issues with a rear light connector and lighting.

So far, there have been no accidents or injuries reported to Ford due to the problem that affects 31 Ford F150 pickups in the U.S. and 51 in Canada. Dealers will replace the spare tire on the pickups that came down the assembly line the Dearborn Truck Plant, Nov. 10-21, 2019. The Ford identifier is 19S55.