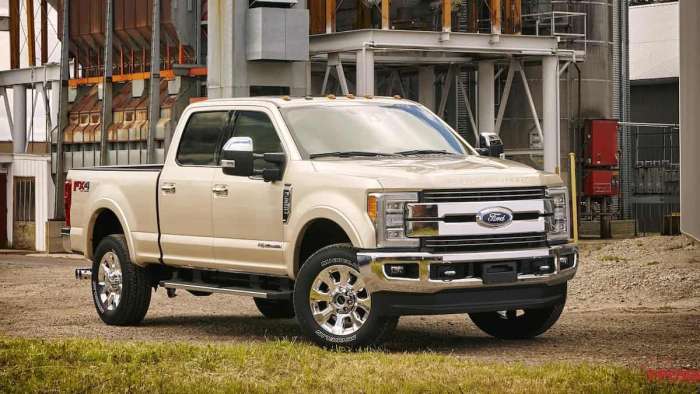 Ford has issued another in a recent series of recalls that impacts its F-Series Super Duty Pickups and its Ford Explorer/Lincoln Aviator SUVs.
Advertisement

In the first recall, the automaker has called back about 262,000 2017-19 Ford F250, F350, and F450 Super Duty vehicles for unintended tailgate openings. The reason for the recall is the location of the electric tailgate latch-release in the tailgate handle. Ford recently issued a recall for a problem with LED lighting. And, in another recall, Lincoln has recalled the MKX, the predecessor to the Aviator for a battery cable problem.And, Ford also issued another recall for Ranger intermediate pickups for a problem with the rear light connector.

The automaker says that water can enter the electrical wiring, causing a short that results in switch activation that opens the tailgate latch. This problem can occur whether the truck is motion or parked. Further, if the tailgate opens and there is unrestrained cargo in the bed, a load may be dumped on vehicles following the pickup or on the roadway, causing a mess. And, this condition can also increase the risk of a crash if unbalanced cargo sliding around and out of the tailgate unbalances the handling of the truck. Vehicles with mechanical tailgate release handles are not affected by this recall.

According to Ford, there have been no reports of crashes or injuries relating to this condition.

Most Of The Trucks In The U.S.

Owners of the recalled trucks should bring them back to their dealers where technicians will modify the tailgate frame wiring harnesses by adding jumper pigtails to isolate the tailgate release control circuits and install a new tailgate handle release switch. The Ford reference number is 19S48.

In the second safety recall, Ford is calling back 3,858 2020 Ford Explorer and Lincoln Aviator vehicles for an issue with the fuel line. According to information announcing the recall, in the affected vehicles, the “convolute protective sleeve” on the fuel line is not long enough. Because of this condition, it is possible for hard contact with the “convolute-protected” vapor fuel line to occur. With engine vibration and roll, over time, hard contact between the fuel lines could cause the convolute on the vapor line to rube through the plastic liquid fuel line. If this condition occurs, a fuel leak could happen which would increase the risk of a fire.

No Accidents Or Injuries Reported
.
According to the automaker, there have been no reports or accidents, injuries, or fires related to this recall. The action affects 3,858 vehicles in the U.S. and its territories, 35 in Canada, and seven in Mexico. Ford made the vehicles at the Ford Chicago Assembly Plant. The Explorers affected were built from Jan. 18 – July 17, 2019, the Aviators from Jan. 15-July 17, 2019.

Dealers will inspect vehicles for a full-length yellow-colored protective convolute on the liquid fuel line. If the convolute does not cover the full length of the fuel line, dealers will remove the existing cover and replace it with one that is the correct length. A technician will insert a tie-strap to secure the covering. The Ford reference for this recall is 19S49